Saab has been awarded a $117 million contract covering its portion of the engineering, manufacturing and development phase of the US Air Force's T-X trainer project.

Announcing its receipt on 18 October, the Swedish company said the sum will cover activities running through 2022, with these to run in parallel with work performed by T-X prime contractor Boeing. "EMD includes testing, US military flight certification and delivery of five jets," says Saab.

The USAF in late September announced its selection of the Boeing/Saab T-X proposal, following a contest that had also assessed the Leonardo T-100 and Lockheed Martin/Korea Aerospace Industries T-50. Worth $9.2 billion, its Northrop T-38 replacement programme calls for the production of 351 single-engined advanced trainers and the type will achieve initial operational capability by 2024. 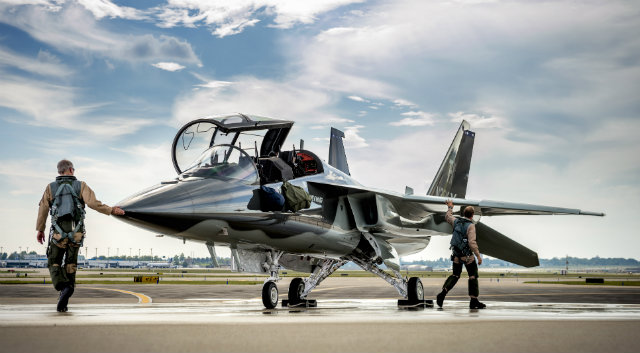 Boeing will perform final assembly of the T-X at its St Louis plant in Missouri, with Saab to provide its rear fuselage from a production site to be established in the USA.

Speaking during a third-quarter results call on 23 October, Saab chief executive Håkan Buskhe said the company has not yet decided on the location for the new facility. However, he notes that its supply chain will need to be developed from having traditionally produced between eight and 12 Gripen fighters per year to rapidly supporting a T-X production rate of 60 units per year.

Buskhe notes that in addition to meeting USAF training requirements, Saab also sees strong export potential for the T-X design. "Many US customers would like to be in the same concept as the US Air Force," he says.