​Singapore to order four F-35s, with options for eight

Singapore plans to place a firm order for four Lockheed Martin F-35s, with options for an additional eight aircraft.

“We have announced our plans to replace our F-16s, which will face obsolescence post 2030, with the F-35s,” said defence minister Ng Eng Hen in a parliamentary speech.

“This will mean the RSAF fighter fleet will consist of F-35 and [Boeing] F-15SGs if plans come to fruition a decade or so from now.”

He added that Singapore will issue a letter of request for four aircraft and options for eight. He stressed that the US congress must approve the sale, but the deal has the blessings of the both President Donald Trump and the US Department of Defense.

Ng made no mention of which variant Singapore will obtain, although the country is believed to be interested in the F-35B short take-off vertical landing (STOVL) variant. He also did not say when the Republic of Singapore Air Force will receive the jets.

The remarks are consistent with Singapore defence ministry statement in January that said a “small number” of F-35s would be obtained for assessment purposes. 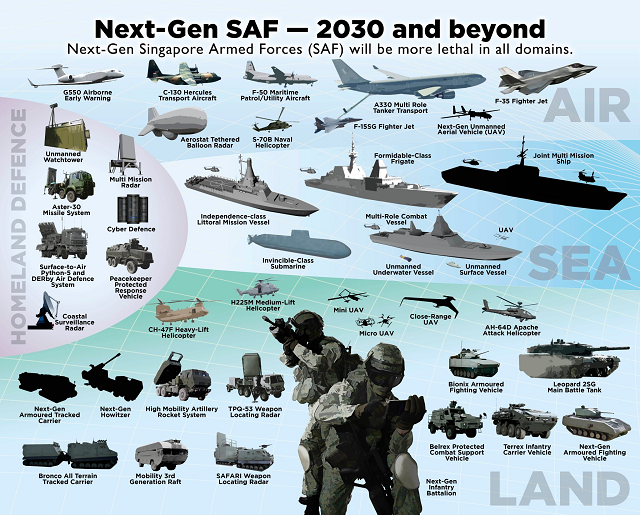 Ng also tweeted a presentation slide of Singapore’s planned military equipment for “2030 and beyond.”

The F-35 and F-15SG were the only two fixed wing fighters displayed. Also included where the C-130 tactical transport and Fokker 50 maritime patrol aircraft.

Singapore has been tight-lipped about its plans for both fleets, but both will increasingly face obsolescence.