Avianca Brazil says it will return eight aircraft to lessors, following reports of legal action from lessors to seek the return of up to 13 Airbus aircraft.

FlightGlobal understands that Aircastle has received court approval in Brazil to repossess its 11 aircraft, comprising one A330 and 10 A320s, all of which are either 2014 or 2015 vintages.

The Sao Paulo-based airline downplays the aircraft return, saying it had planned the fleet reductions since August, and adds that operations will continue as normal. Avianca Brazil operates a fleet of 56 aircraft and has another two in storage, shows Flight Fleets Analyzer.

During a third quarter earnings call on 1 November, Aircastle chief executive Michael Inglese told investors that the lessor was working with a "customer in Brazil", understood to be Avianca Brazil, the only carrier in Brazil the lessor leases Airbus aircraft to, according to Fleets Analyzer.

FlightGlobal further understands that the lessor is actively marketing the aircraft to potential customers. Aircastle was not immediately available for comment. 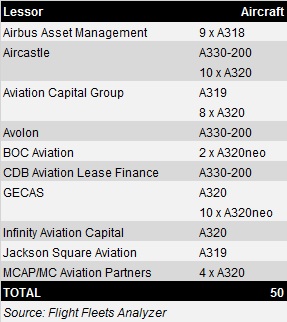 This is not the first time that lessors have taken action against the airline and its owner Synergy for missed lease payments. Avolon sued Synergy in 2016 for failing to make lease payments it guaranteed on behalf of Avianca Brazil.

Avianca Brazil grew quickly in recent years, becoming Brazil’s fourth largest airline with a current market share of 13.6%. It transported 9.7 million passengers from January to October this year, 11.5% more than in the same period of 2017.

Avianca Brazil operates independently from the Bogota-based Avianca group but has owners in common. The Brazilian carrier is wholly owned by Synergy, which is the largest shareholder in Colombia's Avianca. Avianca Brazil's chairman is Jose Efromovich, who is the brother of Avianca chairman German Efromovich, the owner of Synergy.