Ethiopian Airlines has taken delivery of its first Boeing 737-800SF freighter, which will be assigned to its Ethiopian Cargo division.

The company received the CFM International CFM56-powered aircraft on 1 March. 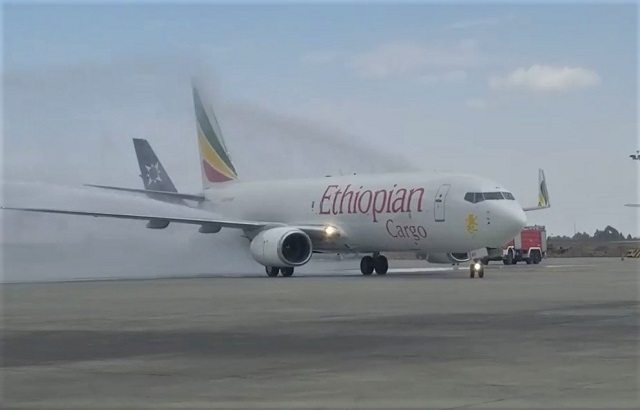 Ethiopian says the “significant addition” of the freighter will give it the capability to serve short-haul routes efficiently within Africa and the Middle East.

It was originally delivered to Air Berlin in 1999, according to Cirium’s Fleets Analyzer, before being transferred to US lessor GECAS which then sent the aircraft for cargo conversion.

US-based Aeronautical Engineers carried out the freighter modification, completing the work in December.

It disclosed in mid-February that it had obtained US FAA certification for the conversion, after a hold-up caused by the partial shutdown of the US government during December-January.

Aeronautical Engineers says the -800SF offers a “substantial” payload improvement and fuel-burn compared with the -400SF.

Senior vice-president for sales and marketing Robert Convey says the company is “still experiencing significant demand” for the -400SF but expects the -800SF to gain popularity over the next two years as feedstock prices drop and availability increases.

He points out that the modification firm has already landed orders and commitments for 111 737-800SFs.

“We believe this programme will far exceed the success we have had with the 737-400SF,” says Convey, estimating that the company will be able to secure 400 of the 750 737-800 conversions it forecasts for the next four decades.

Boeing also offers a conversion programme for the 737-800. It delivered its first, also via GECAS, to West Atlantic last year.