JetBlue to expand facilities at Boston and Fort Lauderdale

JetBlue Airways is expanding its footprint at its Boston and Fort Lauderdale focus cities, as it continues to focus its growth at both airports.

The New York-based carrier will expand to 30 gates from 24 at Boston Logan by 2021, and add five gates at Fort Lauderdale, JetBlue executive vice-president of commercial and planning Marty St George says and airport presentations show.

"Our ability to grow our relevance in Boston and Fort Lauderdale depends on having the infrastructure in place to support this growth," said St George during a quarterly earnings call on 24 April.

Many of the additional gates at Boston Logan will come through the terminal C connector project. Massport, which operates the airport, will connect inside security the isolated C40-42 gate area with the central C gate area, as well as with terminal B, a board presentation from January shows. The works will add four new gates to both C and B. 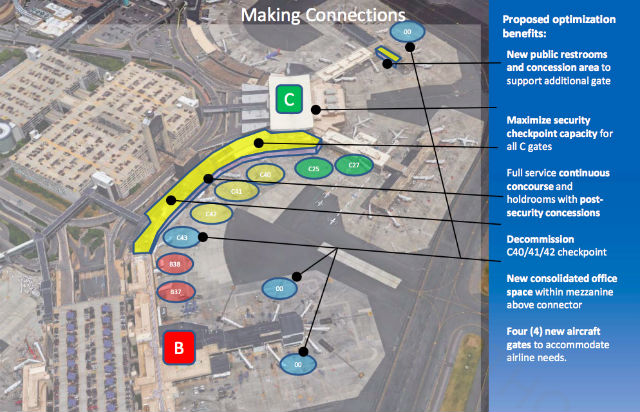 The relocation of American Airlines to the west side of terminal B will allow Alaska Airlines to move to B from C in 2019, freeing up gates C40-42 for JetBlue. The airline will also use the two new gates planned for C.

The five gates in terminal C, plus one in terminal E that JetBlue will have preferential use of from 2019, will bring its total to 30 gates at the airport, the airline confirms.

JetBlue will have the most space of any carrier at Logan with the additions. American will downsize to 18 gates from 22 in 2019, while Delta Air Lines will expand its footprint to 21 gates at the same time.

The extra space gives JetBlue a competitive advantage in the Boston market, where it has grown a strong local presence over the past decade. It plans to expand to 200 daily departures in the coming years.

JetBlue is scheduled to operate an average of 151 departures per day from Boston in the first half of 2018, FlightGlobal Diio schedules show. It will carry 28.5% of seats from the airport, more than any carrier, during the period.

In Fort Lauderdale, JetBlue reached an agreement with operator the Broward County Aviation Department to add five gates to its total during the first quarter, says St George. It is also working with the airport to "construct" new gates there.

"This is the first in a series of gate additions," he says.

Neither Fort Lauderdale nor the airline were immediately able to say how many gates JetBlue has preferential use of at the airport.

JetBlue is in the midst of a $235 million terminal 3 modernisation project at Fort Lauderdale. While the works do not include additional gates, they do cover renovation of the terminal's two concourses, the check-in and baggage claim areas, and a new secure connector to terminal 2 by 2021, a presentation to Broward County commissioners earlier in April shows.

The airline will work with Delta Air Lines on the connector to terminal 2, the presentation shows.

Fort Lauderdale partnered with Southwest Airlines, the second largest carrier at the airport, to build the five-gate concourse A in terminal 1 that opened in June 2017.

JetBlue is scheduled to operate an average of 101 flights per day from Fort Lauderdale in the first half of 2018, schedules show. It will carry 23.3% of total seats from the airport, more than any carrier, during the period.

Massport and the Broward County Aviation Authority were not immediately available for comment.