Operators of certain older business jets that fail to meet US Federal Aviation Administration Stage 3 noise limits will be banned from operating in the lower 48 states by the end of 2015.

Congress included the requirement in a section of the FAA Modernisation and Reform Act 2012 in a move to reduce noise at airports.

But the agency believes operators will struggle to dispose of non-compliant aircraft as the ruling's implementation will lead to a glut of them on the market.

Data compiled by the FAA shows 599 US-registered business jets are affected by the rule, 382 of which it believes cannot be made compliant with Stage 3 noise limits because there are no modifications available. The remaining 217 aircraft are all Gulfstream GIIs and GIIIs. 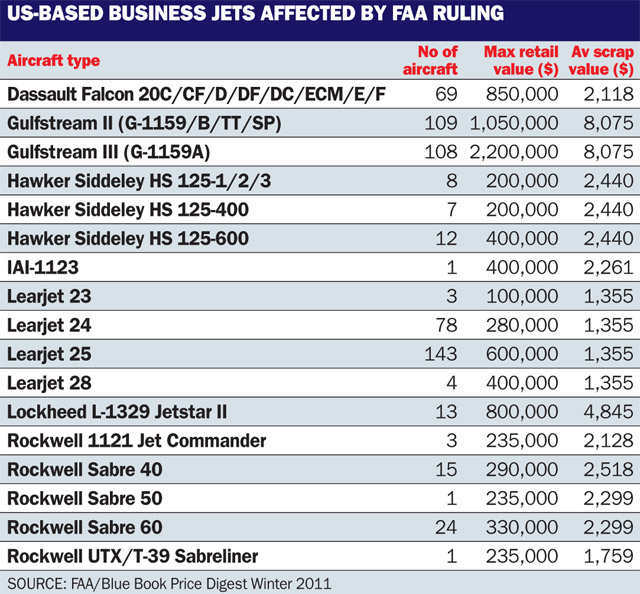 However, the FAA's predictions are already inaccurate. Although it lists 69 US-registered Dassault Falcon 20s within the 382 unmodifiable jets, both the airframer and its engine supplier, GE, insist hush kits are still available for the type's CF700 engines.

The agency acknowledges its estimate is now out of date, but says it was based on information from the engine manufacturer in 2012, which suggested the hush kits had ceased production in 2003. "The FAA has just learned that manufacturing of the hush kit began again in early 2013 under a different manufacturer. This may have the effect of reducing the estimated cost to comply with the ban Congress mandated on these aircraft," it says.

The modification, contained within a communication from GE to CF700 overhaul shops in December, includes a new fan exit guide vane assembly with additional guide vanes. The parts are available via Noise Reduction Engineering, owned by Michigan-based Kalitta Turbines.

The FAA's forecast could decline further too, if a hush kit modification is introduced for Bombardier Learjet 20s. The Learjet 23, 24, 25 and 28 models are included on the list of affected aircraft types.

Bombardier says that while there is no hush kit currently available for Learjet 20-series jets, third-party providers are developing a modification for introduction prior to the 2015 deadline. Most of these models operating in the USA are Learjet 24s and 25s, with at least 78 and 143 aircraft respectively.

The 217 Gulfstream IIs and IIIs affected by the rule, have hush kits available for each via Quiet Technology Aerospace and Hubbard Aviation Technologies. But the modifications are costly, with operators charged $850,000-1.5 million, says the FAA, using estimates from the providers. This exceeds the average pre-law retail value of the Gulfstream II, the agency notes.

The FAA also points out that an unknown number of Falcon 20s, Gulfstream IIs and IIIs and Learjets may have already received hush kit modifications. Some Falcon 20s have also been retrofitted with Stage 3-compliant Honeywell TFE731 engines, says Dassault.

Other models affected by the noise restrictions include the Israel Aerospace Industries 1123 Westwind, the Lockheed L-1329 Jetstar, and Rockwell's Jet Commander plus its Sabre 40, 50, 60 and Sabreliner.

Besides purchasing hush kits, operators of the affected models have few other options but to sell them to parties outside the USA, scrap them or part them out. Selling the aircraft could prove difficult in a limited global market and several countries have already passed their own noise restrictions, including Australia, Austria, Belgium, Hong Kong, Japan, ­Singapore and Switzerland.

A total of 392 of the affected aircraft types are registered outside the USA, with nearly half based in Mexico, making it hard for US operators to sell the aircraft across the border. "A lack of demand for the banned airplanes will leave most owners with no choice other than to sell the airplanes for their scrap value," it states. A move by many operators to sell them outside the USA will cause "a glut in the marketplace", it adds.

Gulfstream acknowledges the ruling could affect the market for used aircraft. It says: "The pre-owned market could see an uptick in the number of available GIIs and GIIIs once this ruling goes into effect. This, in turn, could impact returns."