PARIS: A350 first in line for deployable flight recorder

Airbus is entering a partnership to develop a deployable flight recorder which will be initially introduced on the A350 from 2019.

The automatic deployable flight recorder will be a combined voice and data device, and is being developed in co-operation with L3 Technologies and Leonardo's DRS Technologies Canada arm.

Airbus executive vice-president for engineering Charles Champion detailed the programme during a briefing at the Paris air show.

While real-time transmission of data "will come eventually", he says Airbus wants to pursue a "hard solution" through the development of a releasable recorder.

The lightweight device will not need to directly capture information but instead will receive and store, in a memory module, an onward transmission of cockpit-voice and flight data. 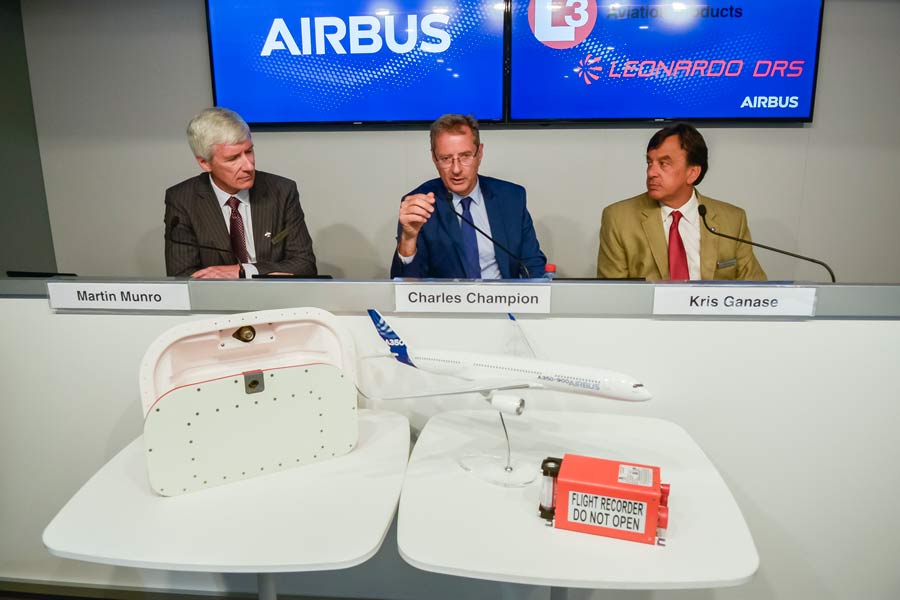 It will be mounted in the vertical fin of the A350, close to the fuselage. A housing case with a spring mechanism will be installed inside the fin structure, providing a hollow into which the deployable recorder is inserted.

The recorder itself will, as a result, essentially be carried within the fin and, once mounted in the housing, its outer surface will be flush with the fin's skin, ensuring that there is no effect on the aircraft's aerodynamics.

Deployment of the recorder would be triggered by significant structural deformation or an impact with water.

Champion says Airbus will use deformation sensors to provide a triggering signal. The threshold would be substantial and "beyond the elastic domain", he says: "The purpose is not to have deployment during a hard landing, or a hit from a catering truck, or bird strike."

In the event of an airborne deployment, the spring mechanism in the housing case would push the recorder into the slipstream, where its shape would act as an aerofoil and ensure it is carried away from the aircraft.

The device will not need the same crash-protection structure as a regular recorder and this, plus the reduced internal equipment requirement, means it is relatively lightweight. Munro says that, after a mid-air deployment, it would free-fall but its descent would stabilise at terminal velocity.

If the aircraft came down in water, hydrostatic sensors would trigger deployment at a depth of 2m, and the recorder is designed to float. Munro adds that it would have an emergency locator transmitter, signalling the aircraft's most recent position and updating the information in the event of drift.

Champion says Airbus is pursuing the initiative in the aftermath of accidents in which the inability to locate and recover flight recorders has "frustrated" investigators.

L3 is the lead partner in the programme, and will be responsible for designing a fixed crash-protected combined voice and data recorder with 25h capacity. It will also serve as integrator for the deployable recorder, which will be designed by DRS Technologies Canada.

The deployable recorder will be complement the new higher-capacity L3 fixed recorder, which will be fitted in the aircraft's forward fuselage.