It took delivery of the aircraft on 29 November and will put it on the Shanghai Pudong-Sanya route from 15 December. On its website, Suparna adds that the aircraft will also fly the Zhengzhou-Sanya route.

The Shanghai-based carrier tells FlightGlobal that the jet, registered B-2738, is configured with 36 business and 177 economy seats. Pictures on its Weibo account show that the seats are in Hainan Airlines' colours, and are each fitted with an in-flight entertainment system.

Asked how many 787s it intends to add, Suparna says it would like to introduce more "in the following years", but that this is dependent on the "operational situation".

"We will create a series of theme cabins together with designers and brand partners to build personalised cabins, bringing more fun for tourists' flying experience." 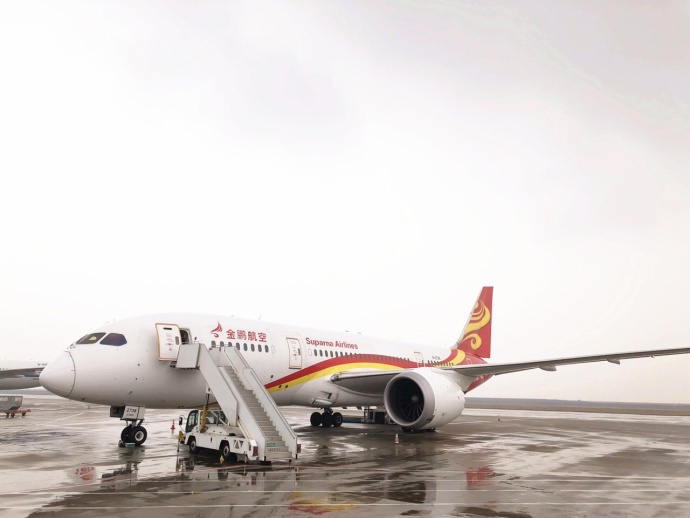 Suparna's current business scope only allows it to operate domestic passenger services, on top of domestic and international cargo routes.

Formerly Yangtze River Express, the carrier was renamed Suparna Airlines in July. Then, it said that the HNA Group airline will also undergo a brand upgrade with a newer, more advanced fleet and more comprehensive services.

Previously an all-cargo operator, HNA Group expanded its scope to include passenger services in 2015, becoming the group's main operator in Shanghai.

Flight Fleets Analyzer shows that Suparna has 13 Boeing 737 Freighters, eight 737-800s, and four 747 Freighters in its fleet. It largely operates cargo services out of its main base at Shanghai Pudong International airport but also has domestic passenger services.

Fleets Analyzer shows that the 2014-built General Electric GEnx-powered 787-8, is owned and managed by Hainan Airlines. It also lists Hainan Airlines with a fleet of 10 -8s and 14 787-9s.