Boeing has confirmed plans to conduct ski-jump take-off tests with the F/A-18 E/F Super Hornet during the first quarter of 2020. 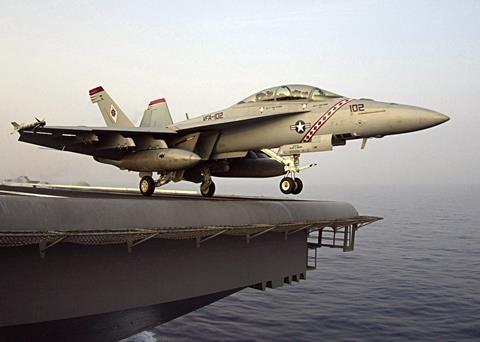 A Super Hornet launches from a US Navy aircraft carrier

India’s only carrier, the INS Vikramaditya, is equipped with a ski-jump ramp to launch aircraft, as is a second carrier - the INS Vikrant - that has yet to enter service.

In US Navy service the Super Hornet is launched by catapults, a capability that could feature on a proposed third Indian aircraft carrier.

“The [ski-jump] testing is going to take place sometime in the first quarter at [NAS] Patuxent River,” says Shockey.

New Delhi has a requirement for 57 carrier-borne fighters - a contest which will pit the Super Hornet against the Dassault Rafale.