Quebec delays exit from A220 partnership after investing to boost production

Airbus and the Canadian province of Quebec’s government are to provide a $1.2 billion funding injection to the A220 programme intended to increase the production rate of the twinjet.

Each side’s investment will be proportional to its interest in the Airbus Canada partnership that builds the A220. The airframer holds 75% while the government has the balance.

The government’s funding, through the entity Investissement Quebec, will push back the deadline for Airbus to buy out the government’s shareholding in the partnership.

This would have initially taken place in 2026 but instead it will be delayed by up to four years.

The government says this will give Airbus Canada “time to create more value” in the A220 programme.

At the end of 2021 the A220 had a backlog of 475 aircraft and the Quebec government says the “strong order book” is the driver for the investment, intended to “support the acceleration” of production.

It adds that the injection will “allow the programme to reach maturity”, maintaining the equivalent of 2,500 aeronautical jobs in the province and enabling creation of new positions. 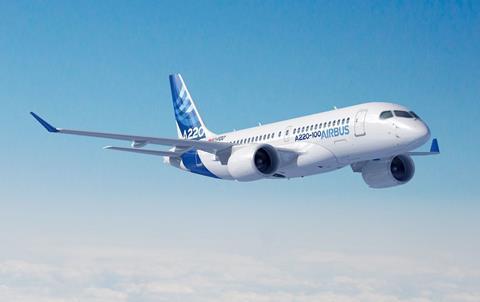 The A220 programme – acquired by Airbus in mid-2018 – is still running at a loss, and the airframer has previously stated that production needs to ramp up in order to become profitable around the middle of the decade.

If production rates rise in accordance with plan, the partnership could be employing 3,000 personnel by 2025.

Airbus has given a set of assurances regarding jobs and production, the government says, to ensure that the Quebec economy benefits.

“We obtain longer-term commitments and we have a better chance of recovering our initial investment, including the amount of $1 billion,” says regional economic development minister Pierre Fitzgibbon.

Airbus chief executive Guillaume Faury says that the airframer is continuing to invest in the partnership, as its majority shareholder, in order to increase monthly production rates and “ensure the anticipated success of the program in the middle of the decade”.