Taiwanese carrier Starlux Airlines is close to receiving its air operator certificate, ahead of plans for a 23 January take off.

The Civil Aeronautics Administration (CAA) completed its review of the carrier’s application last week and this has been passed on to the Ministry of Transportation and Communications (MOTC), local media reports indicate. 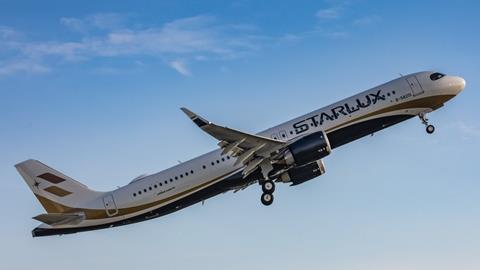 Starlux will commence operations with the A321neo.

MOTC gave its approval this week and expects to issue an air operator certificate soon.

Starlux will apply for route licenses from the regulator once it gets the green light, as well as a call sign from ICAO and airline code from IATA.

Cirium fleets data shows the carrier is taking 10 A321neos from lessor GECAS. The first aircraft, MSN 9208, was delivered in October, while MSNs 9147 and 9314 are expected to arrive in January.

Starlux has indicated that it will deploy its first three A321neos on services to Vietnam, Macau and Malaysia.