Order and delivery figures demonstrate that following a preceding record year, 2014 was another all-time high for commercial aviation.

Narrowbody orders totalled 2,789 where Airbus received 1,540, including 1,107 for the A320neo variant while Boeing took in 1,199, including 886 for the 737 Max. Canadian manufacturer Bombardier also received 61 orders for its CSeries. Widebody new orders came in at 594 with 244 for Airbus and 350 for Boeing while regional jet and turboprop orders totalled 241 and 306 respectively.

Lessor SMBC Aviation Capital stood out during 2014 with their orders of 115 A320 family aircraft, including 110 for the re-engined neo, and 80 737 Max aircraft. In July, Emirates ordered 150 Boeing 777X twin-engined aircraft, a deal originally disclosed at the 2013 Dubai air show. Low-cost carrier Ryanair ordered 105 737s, including 100 for the Max variant while China Aircraft Leasing placed orders for a total of 104 A320 family aircraft, of which 74 were for the neo variant. 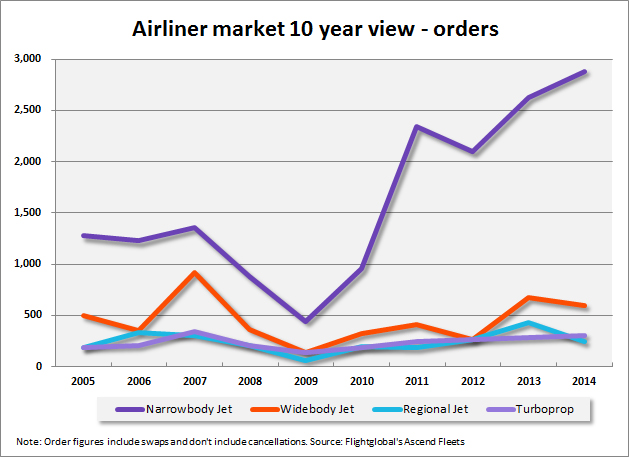 A total of 1,729 commercial aircraft deliveries took place in 2014, representing an overall seven percent increase on the previous year. The year 2014 was the fourth record year in a row for the total of commercial aircraft deliveries and an all-time high for the narrowbody and widebody market groups. Deliveries included 954 narrowbody and 371 widebody aircraft. Regional jet and turboprop deliveries totalled 176 and 228 respectively. 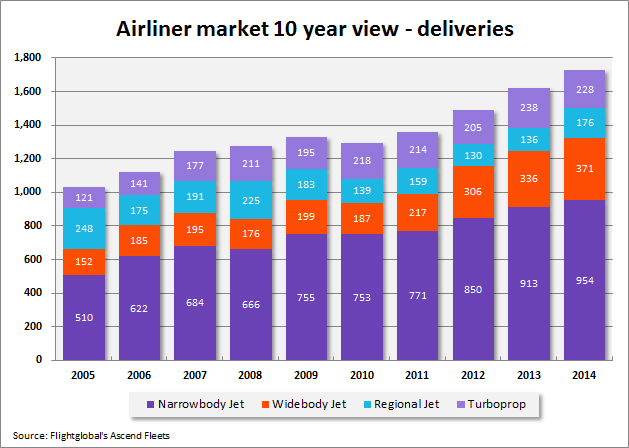 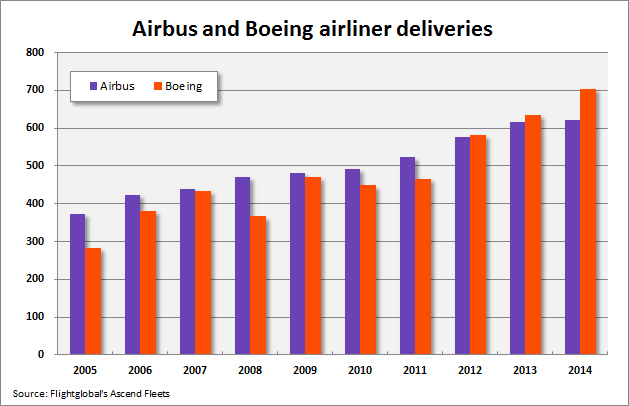 From an operator perspective, China Eastern Airlines took in 65 aircraft while American Airlines received 61. China Southern Airlines and Air China received 51 and 43 aircraft respectively. A share of 42% of the commercial aircraft deliveries were for operators based in Asia-Pacific, followed by North America and Europe with shares of 21% and 17% respectively.

Commercial order backlog figures have consistently been on the rise since 2009 and the record year of 2014 ended at 14,425 aircraft, representing a 14% increase on the previous year. Airbus totalled 6,373 while Boeing’s backlog stood at 5,752. Embraer, Comac, Bombardier and ATR showed figures of 459, 399, 335 and 285 aircraft respectively. All market groups actually showed an increase in backlog on the year before.

At the end of 2014, Indonesia’s Lion Air topped the backlog by operator listing with a total of 543 aircraft, including 273 737s, 227 A320 family aircraft, 40 ATR72s and three A330s. American Airlines and AirAsia followed with backlog figures of 419 and 309 respectively. In the leasing market, Air Lease Corporation and AerCap showed figures of 295 and 236 respectively. 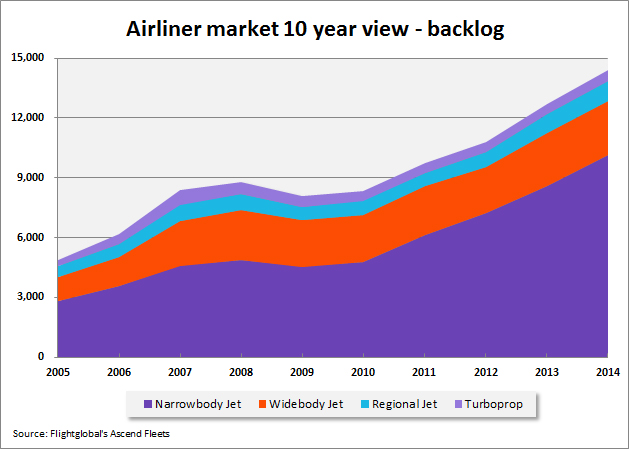