Skyworks Global’s retro gyrocopter concept took a turn back toward the serious via a partnership with Northrop Grumman-owned Scaled Composites to design, build and test its first prototype aircraft.

Utah-based Skyworks believes its VertiJet gyrocopter could have a 348kt (644km/h) cruise speed with a range of 1,000nm (1,852km). The company thinks it could have a prototype flying in 18 to 24 months now that it has the rapid prototyping expertise of Scaled Composites backing its project. It declined to share details of the partnership, including what specific role Scaled Composites will play. 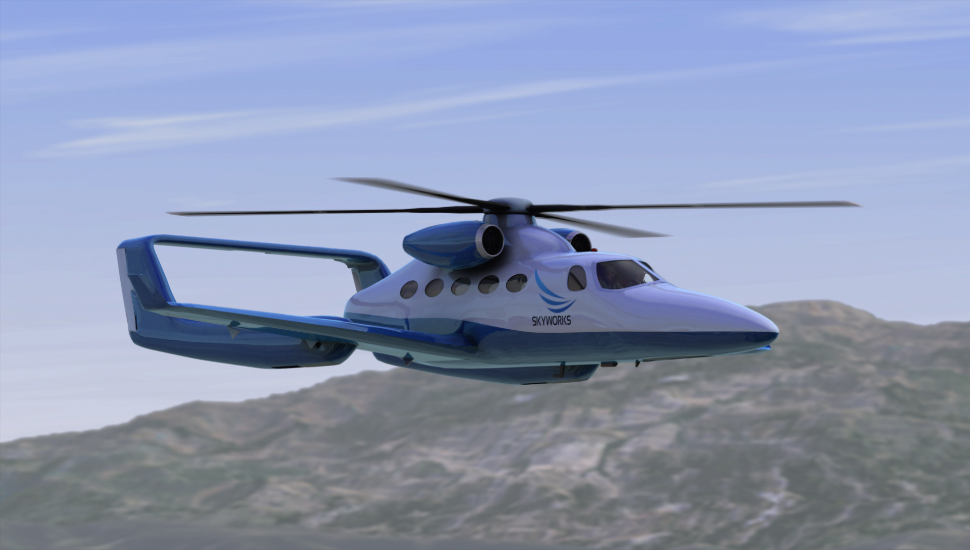 Originally a small publicly traded company called Groen Brothers Aviation before being renamed in 2017, Skyworks has been designing and selling small gyrocopters, including home-built kits, since the 1980s. The firm takes its inspiration for its VertiJet project from the British Fairey Rotodyne, a large compound gyrocopter built in the 1950s that used tipjets on the end of its rotorblades to take off and land vertically. That aircraft development project was cancelled partly due to the excessive noise the tipjets generated.

For its part, Skywork’s compound gyrocopter has advanced in fits and starts. In 2005, the company received funds from the US Defense Advanced Research Projects Agency (DARPA) to design a proof-of-concept high-speed, long range, vertical take-off and landing gyrodyne rotorcraft, called Heliplane, intended as a demonstrator aircraft for potential use in combat search and rescue roles. However, when the DARPA contract was terminated in 2008 the company collapsed, nearly filing for bankruptcy before it was rescued by investor Steve Stevanovich in 2012. The firm previously claimed that the contract was cancelled due to military funding constraints during the 2008 economic downturn.

Now, with Scaled Composites on its team, Skyworks is seeking another lease on life for its compound gyrocopter.

“We certainly want to leverage the capabilities of Scaled Composites,” says Don Woodbury, Skyworks’ chief technology advisor and former DARPA Heliplane programme manager. “They are really, if not the world's leading, one of the leading prototyping companies in the world. We're very excited about their potential contributions to the team.”

Founded by aerospace engineer Burt Rutan, Scaled Composites of Mojave, California is known for rapidly prototyping aircraft, flying on average one new aircraft per year. For instance, the company was responsible for the year-long development of the Model 355, which later became the optionally piloted Northrop Grumman Firebird, a reconnaissance aircraft.

A gyrocopter differs from a helicopter in that the aircraft’s unpowered rotor creates lift through autorotation; that is, when forward thrust provided by a propeller or jet turbine engine causes air to flow over the rotors. Skywork’s compound gyrocopter adds tipjets to the end of its rotors to power vertical takeoff and landing. The aircraft is powered by jet turbines and has wings to add lift during horizontal flight.

Skyworks contends that the compound gyrocopter tipjet system reduces complexity by removing the rotor mast and transmission. Simplicity ought to make the aircraft cheaper than comparable compound helicopters or tiltrotors, such as the Sikorsky S-97 Raider or Bell V-280 Valor, says Woodbury. In addition, the ability to transition from vertical takeoff to flight on a wing allows the aircraft to travel more efficiently and at greater speeds than a traditional helicopter, he says.

Woodbury says the VertiJet could have a variety of commercial or military roles, including fulfilling the US Marine Corps’ armed escort requirements. In April 2019 the service disclosed, as an add-on to the US Army’s Future Long Range Assault Aircraft (FLRAA) programme, that it wants a rotorcraft that can fly unrefuelled combat radius of 450nm (833km) with 30min loiter and at 330kt indicated airspeed at 100% of intermediate rated power – speed requirements needed to keep up with its Bell Boeing V-22 Osprey troop transport.

Skyworks says it has not finalized the designs of its first VertiJet aircraft, though it would likely be similar in concept to the Heliplane design that came out of the DARPA programme.

Initially, the company does not intend to participate in any US military development programme. Instead, the firm will be appealing to private investors for funding, hoping to leap ahead of competitors such as Sikorsky and Bell with a superior demonstration aircraft within a matter of years. The firm declines to disclose how much money it will raise, but said a gyrocopter sized to carry four passengers could possibly be built for less than $10 million.