The US military wants to give the Bell-Boeing V-22 Osprey new eyes and the ability to target enemies from afar by installing a multispectral imaging and targeting sensor system.

US Naval Air Systems Command (NAVAIR) says in a new sources-sought notice that it is developing common mechanical and electrical interfaces that would allow any V-22 – including the CMV-22B type being procured by the US Navy – to carry a gimbaled multispectral sensor. Those common interfaces will be ready by June 2017.

NAVAIR says there is enough volume to accommodate a 45.7cm (18in) sensor in the aft cargo hook well, or potentially a 50.8cm (20in) unit “pending detailed engineering analysis”.

The V-22 programme office is fleshing out the military's requirements for a sensor, and wants to test various product options on a V-22 aircraft “later this year”. It will follow up by demonstrating “up to four” competing sensors solutions in an operational environment at the Marine Aviation Weapons and Tactics Squadron One (MAWTS-1) tactical demonstration event in late 2017.

“As the sensors are planned to be demonstrated on a V-22 aircraft later this year, a technical readiness level of seven or higher is required,” the source-sought notice states. 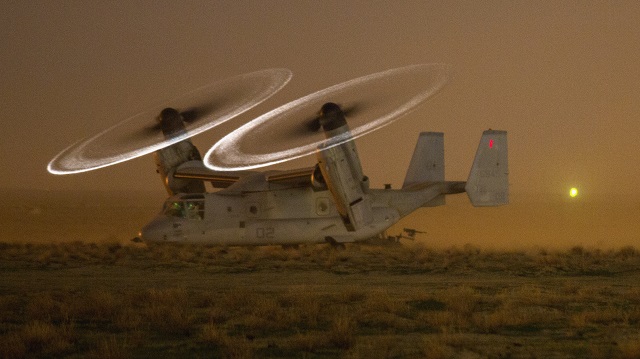 The current version of the V-22 operated by the US Marine Corps and Air Force is equipped with an APQ-174 multi-mode radar and AAQ-27 forward-looking infrared turret to spot potential threats.

The tiltrotor's primary defensive weapons are machine guns mounted on its rear ramp and belly, but some advocates are calling for forward-firing rockets and missiles.

Adding a multispectral sensor would give the V-22 the similar situational awareness and precision targeting capabilities to the General Atomics Aeronautical Systems MQ-9 Predator UAV, which is equipped with Raytheon's multispectral targeting system. The V-22's sensor would be used for "navigation, targeting and intelligence, surveillance and reconnaissance”.

Congress has expressed strong interest in equipping the V-22 with more weapons and Bell-Boeing has already demonstrated the BAE Advanced Precision Kill Weapon System and Raytheon Griffin B.

These weapons would be particularly useful to Air Force Special Operations Command, which uses the CV-22B type for infiltration, exfiltration, and resupply of US special forces personnel. Those aircraft frequently come under hostile fire on approach and departure. 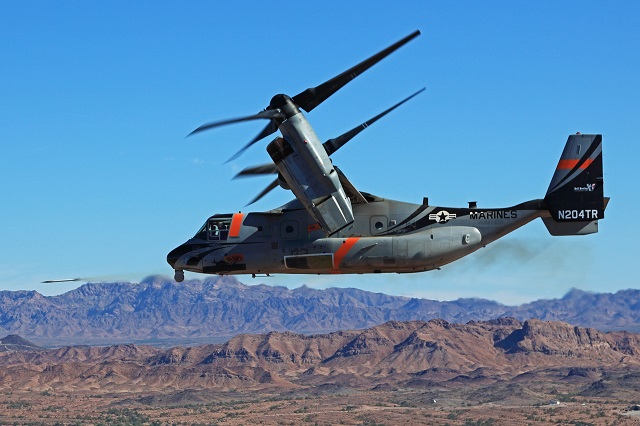