Embraer has delivered a third KC-390 transport/tanker to the Brazilian air force.

Assigned to the First Troop Transport Group, the twinjet is expected to soon join the service’s lead examples in performing logistics flights in support of efforts to counter the coronavirus pandemic.

Embraer says the service’s first two transports have been used to move supplies such as large quantities of personal protective equipment, and larger items including an ambulance, since late March. Pointing to the type’s “high dispatch reliability”, the company cites one mission during which a KC-390 flew from Sao Paulo to Manaus – a distance of 1,450nm (2,690km) – in less than 4h. 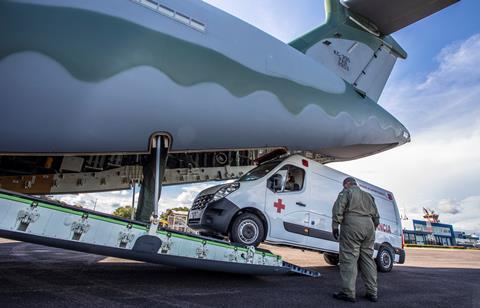 An ambulance was among equipment transported during coronavirus response

“The C-390 Millennium has been successfully used in humanitarian missions to combat Covid-19, demonstrating, in practice, its operational abilities and its importance for the country,” says Embraer Defense & Security chief executive Jackson Schneider.

Cirium fleets data records the newly delivered aircraft as having the tail number 2855.