FARNBOROUGH: New Italian training school to take off with M-346

Italy's ambitions of playing a continued leading role in the provision of international pilot training have been underscored by a new pact involving the nation's air force and an industry team headed by Leonardo.

Announced at the Farnborough air show on 17 July, a new international flight training school (IFTS) will open its doors at Lecce-Galatina air base in 2021. This will have an eventual capacity to provide Phase IV/advanced lead-in fighter training for up to 80 student pilots per year, supported by a cadre of 45 instructors – and a fleet of up to 22 M-346s. 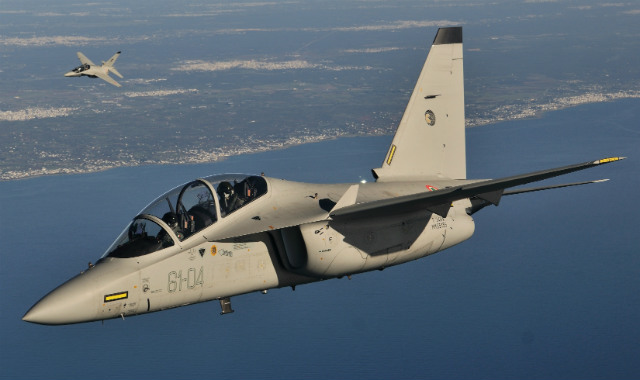 Signed by air force chief of staff Lt Gen Enzo Vecciarelli and Leonardo chief executive Alessandro Profumo in the presence of Italian defence minister Elisabetta Trenta, the pact will be advanced under a public-private partnership style funding model. It will establish new facilities including ground-based training systems at Lecce, with Leonardo teamed with Babcock and CAE on the activity. It also could introduce the M-345 jet trainer.

Under the agreement, Leonardo will provide four M-346s to the joint venture next year, with the IFTS to also draw on the Italian air force's existing fleet of locally-designated T-346As. Operated by its 61st Wing, the type is already used to deliver training to students from nations including Austria, Greece, Kuwait and Poland.

"We have an ambition to double the number of pilots that we train currently," Vecciarelli says. "I believe that countries in the Gulf, as well as in Africa will also be a new horizon for us," he adds. Its future activities could also be expanded to include helicopters and unmanned air systems.

"Leonardo has to move from being a platform supplier to a service provider – we want to enlarge the scope of our activities," Profumo says. "We have the aim of becoming the international flight training school for almost all the fifth-generation air forces worldwide."