Sweden has dropped a plan to reuse some parts from its air force's in-service fleet of Saab Gripen C/Ds during production of new-generation Gripen Es, citing operational considerations.

Announced on 21 December 2018 and worth around SKr430 million ($47.5 million), a new contract from Sweden's Defence Materiel Administration (FMV) covers the provision of unspecified new-build components for some of the nation's future inventory of 60 E-model fighters. This replaces an order signed in February 2013 that proposed sourcing some parts from in-service aircraft.

"Instead of reusing equipment from the Gripen C/D, new equipment is acquired for a part of the total Swedish order of 60 Gripen E aircraft," Saab says. "This approach secures the availability of the Swedish Gripen C/D fleet in operational service, while Gripen E is being delivered and introduced to the Swedish armed forces." 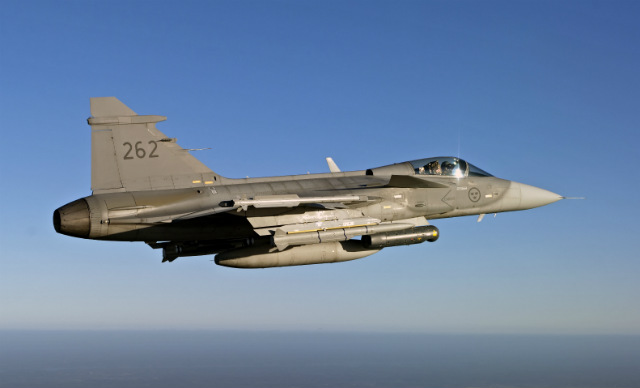 On 1 December 2018, the FMV had announced a revised agreement in relation to the Gripen E programme, for "utilising material from the former JAS 39 A/B, and to supplement certain new equipment". It added: "Through the order, operations and conditions are created for the Swedish armed forces, so that they can still avoid the delivery of a number of JAS 39 C/Ds for rebuilding to JAS 39E."

Saab is scheduled to deliver the first Gripen E to the Swedish air force later this year, with the GE Aviation F414-powered type due to achieve initial operational capability with the service during 2023.