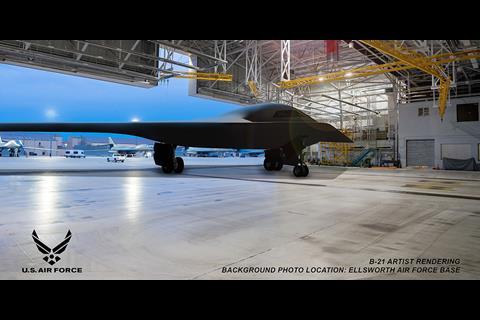 Artist rendering of the Northrop Grumman B-21 at Ellsworth AFB near Rapid City, South Dakota 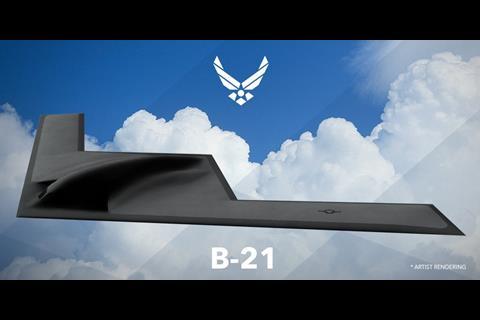 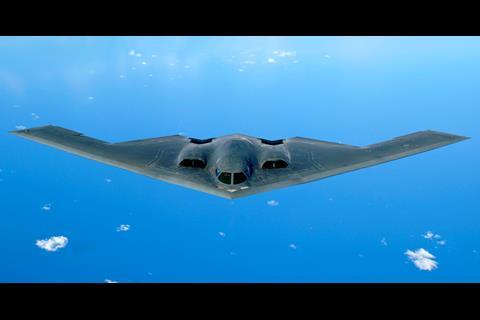 Northrop Grumman B-2 Spirit flying over the Pacific Ocean

An artist rendering released by the service on 31 January depicts the bomber parked in hangars on several US air bases expected to host the flying wing aircraft in the future, including Dyes Air Force Base (AFB) near Abilene, Texas; Ellsworth AFB, near Rapid City, South Dakota; and, Whiteman AFB near Kansas City, Missouri. 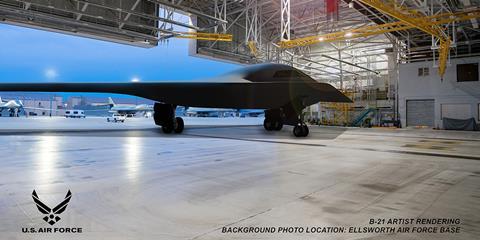 Artist rendering of the Northrop Grumman B-21 at Ellsworth AFB near Rapid City, South Dakota

The image is only the second depiction of the B-21 to be released by the USAF.

The rendering shows an aircraft that looks very similar to the Northrop Grumman B-2A. Both aircraft are flying wings, a shape that is inherently less observable with radar because it lacks 3-D features such as a vertical stabilizer to bounce back radar waves to an adversary.

However, the B-21 seems to have a sleeker profile compared to the B-2A. The aircraft doesn’t have the same engine shoulders that the B-2A had. Engine air inlets have been push forward near its nose and are only visible as small shallow triangular scoops on either side of the cockpit.

Engine fan blades and inlets are highly visible on radar. Reducing the exposure of those features could help the B-21 shrink its radar cross section.

The aircraft also has an extended beak nose in front of its cockpit, compared to the B-2A. Presumably, this hides the cockpit hump behind the underside of the aircraft, further reducing its cross section.

The B-21 cockpit also has only two window panes, compared to the B-2A’s four windows.

The new aircraft also appears slightly smaller, though it is difficult to size as there are no objects nearby in the image for comparison. It is also an artist rendering so it is not clear how closely the 3-D image represents the aircraft’s true scale. A smaller airframe inherently has a smaller radar cross section than a larger one. 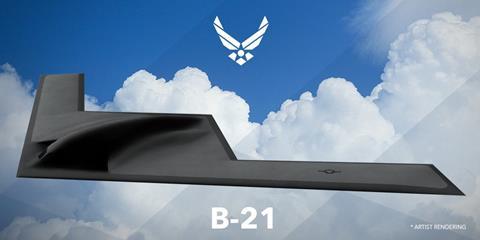 The stealth bomber may also have a lower radar cross section because of other design features.

For example, the first B-21 image released several years ago showed the flying wing had a simpler backside, with just six trailing edges versus 10 on the B-2A. Fewer trailing edges presumably also gives the aircraft a lower radar cross section as there are fewer surfaces to bounce back the radar in the direction of an adversary’s radar-guided surface-to-air missile battery.

What is left unseen by the latest artist rendering includes any new radar absorbent coating materials on the B-21 or any engine heat suppression technology. Hiding engine heat would help the aircraft avoid detection from infrared sensors. If those improvements in those areas are readily available, Northrop Grumman would likely incorporate the technology as well.

The first B-21 is being built at Air Force Plant 42 in Palmdale, California. The USAF plans to fly the aircraft for the first time in December 2021 about 22mi (35km) north across the Mojave Desert to its testing site at Edwards AFB. 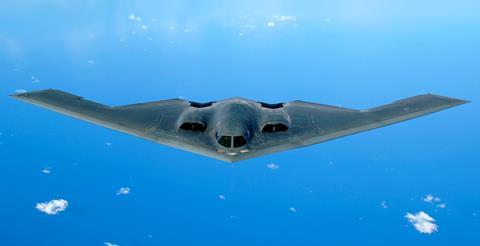 Northrop Grumman B-2 Spirit flying over the Pacific Ocean