Air Tahiti Nui has received the first of four Boeing 787-9s it has on order, which will replace its ageing Airbus A340-300s.

The first aircraft bears the registration F-OMUA (MSN 39297), and is on lease from Air Lease (ALC). Out of the four 787s the airline is planning to take, two are leased from ALC, while the other two are ordered directly with Boeing.

Boeing says each aircraft is configured with 294 seats across three classes: 30 business, 32 premium economy, and 232 in economy, and will operate to destinations such as Auckland, Los Angeles, Paris, and Tokyo.

"The Tahitian Dreamliner will make flying to one of the world's treasures an unforgettable experience, as we introduce new seats and a culturally inspired cabin on the 787. As we celebrate our 20th anniversary this year, the 787 Dreamliner will guide us towards another successful 20 years and beyond," says Michel Monvoisin, Air Tahiti Nui's chairman and chief executive. 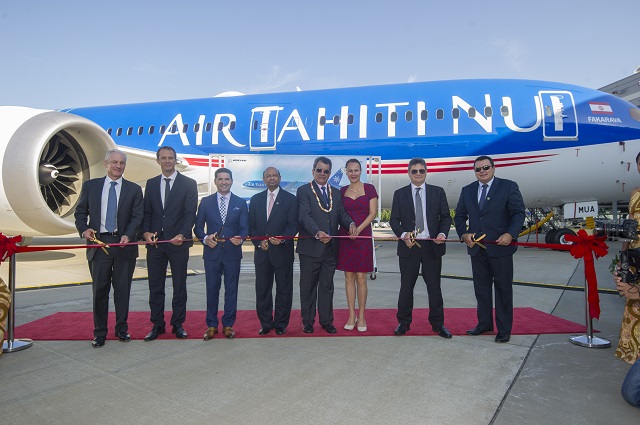 Flight Fleets Analyzer shows that the second 787 (42116) is scheduled to be delivered in December. The remaining two 787s on order will arrive in the first half of 2019. All four aircraft are powered by the General Electric GEnx 1B74/75 PIP II engines.

It also indicates that Air Tahiti Nui has five A340-300s in service, four of which are owned by the airline. A fifth example is leased from an SPV called Aircraft 34A-395 Inc, managed by AerCap.