ILA: Emirates returns to ILA as tensions rise between Lufthansa and Gulf carriers

Emirates has returned to ILA with its Airbus A380, as tensions continue between Lufthansa and Gulf carriers over access to slots at German airports.

The superjumbo – the Dubai airline’s 79th – has just been handed over at Airbus’s Hamburg delivery centre, and was flown to the show by Capt Thomas Ziarno and first officer Abdulrahman Mohamed Al Busaeedi.

Emirates says its A380 has been at every ILA since 2010, “underlining the airline’s steadfast commitment to the German market”. The airline is the biggest A380 operator by far, and has a further 64 on order. Vienna will become the next A380 destination, on 1 July.

The unceasing push of the three big Gulf airlines into the European market has caused consternation among domestic flag-carriers, most notably Lufthansa, Air France and KLM – British Airways being the exception. 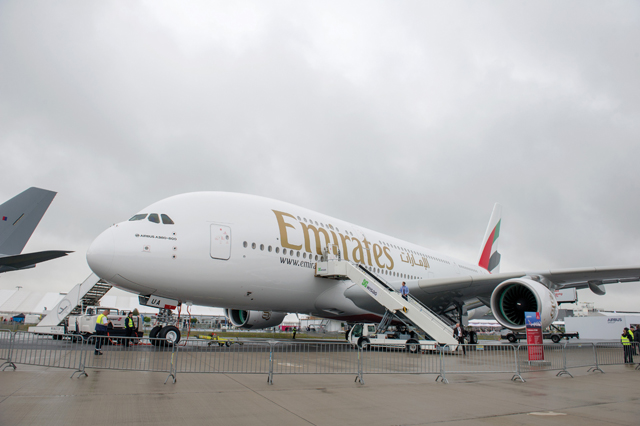 In 2015, Emirates, Etihad and Qatar Airways collectively carried about 16.1 million seats from Europe to the Middle East, nearly four times more than that carried by nine major European airlines, according to Innovata data.

In April, Lufthansa executive board member Karl Ulrich Garnadt warned American Airlines president Scott Kirby – one of those leading a US airline campaign to expose alleged subsidies to Gulf airlines – competition would only worsen. “You ain’t seen nothing yet,” he said at the World Travel & Tourism Council 2016 summit in Dallas. Lufthansa has been a staunch ally of the US carriers.

“What is happening now is, Gulf carriers operate seven times the capacity between the Gulf and Europe than European carriers,” said Garnadt. “Traffic between Europe and Southeast Asia is being dominated by the Gulf carriers.”

Emirates flies to 35 destinations in the European Union, including Düsseldorf, Frankfurt, Hamburg and Munich in Germany. It has been seeking access to other German cities, including Berlin and Stuttgart.

Emirates says its A380 orders alone support 41,000 direct, indirect and induced jobs in Europe, about 35% of them in Germany.