IATA has sharply criticised the European Commission’s intentions to tighten slot rules for the winter travel season as “out of touch with reality”, as the region’s airlines are only just beginning to ramp up operations following the more than year-long coronavirus crisis.

The aviation trade group said on 23 July that the Commission’s plans to set the slot use threshold at 50% for the period from November to April 2022 may lead airlines to once again operate so-called “ghost flights” on empty or near-empty aircraft in order not to lose the slots at certain busy airports.

Early in the pandemic, passenger carriers came under fire for operating such flights as customers across the continent were either locked down completely or strongly encouraged to stay home to mitigate the spread of the highly contagious Covid-19 virus. 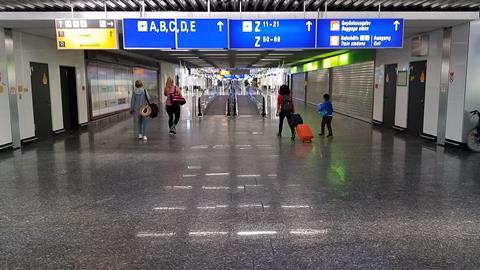 A near-empty concourse at Frankfurt International airport in August 2020, amid the coronavirus pandemic

The Commission’s intention for airlines during the upcoming winter season is that they must use at least half of their assigned slots – whether they need them or not – in order to be permitted to maintain their full presence at those airports. Both airlines and trade groups consider this both financially and environmentally wasteful.

In addition, the rule on “force majeure” – a suspension of slots in exceptional circumstances, such as a global pandemic – has been rescinded for intra-EU operations, IATA says.

“The result of these changes will be to restrict the ability of airlines to operate with the agility needed to respond to unpredictable and rapidly changing demand, leading to environmentally wasteful and unnecessary flights,” IATA says.

IATA maintains the decision will also “further weaken the financial stability of the industry and hinder the recovery of the global air transport network”.

“The airline industry is still facing the worst crisis in its history,” says IATA director general Willie Walsh. ”The Commission had an open goal to use the slots regulation to promote a sustainable recovery for airlines, but they missed. Instead, they have shown contempt for the industry, and for the many member states that repeatedly urged a more flexible solution, by stubbornly pursuing a policy that is contrary to all the evidence presented to them.”

European regulators temporarily suspended the existing ‘use it or lose it’ airport slot rules – which usually require airlines to operate 80% of their assigned slots in a season to retain them for the following year – when the pandemic first hit in early 2020.

That suspension continued last winter and again this summer, albeit with a requirement for airlines to operate 50% of their slots to retain them for summer 2022.

Last month, Walsh criticized the Commission for once again considering tightening the rule, in light of many airlines’ struggles to rebuild their networks.

At the time he wrote in a blog post that “to reinstate a significant threshold now, above say 30%, would be a clear policy failure”.

IATA says that intra-EU recovery is not nearly at a level that would justify the 50% threshold. The organisation estimates that international travel will only reach 34% by the end of 2021. In addition, demand in winter is generally lower than in the summer, even without pandemic-related issues.

The group says long-haul bookings in the EU are currently at just 20% of 2019 levels.

Travel restrictions and entry bans remain in place in numerous countries, and have been re-imposed or tightened in others, as the more virulent Delta variant of the virus tears around the globe.