Mitsubishi Aircraft intends to display the MRJ in an air-show flying programme for the first time at this year's Farnborough air show.

The manufacturer revealed in April that it was planning to bring the Pratt & Whitney PW1200G-powered regional twinjet to Farnborough and hoped to demonstrate the aircraft in the daily flying display. In its latest communication on its press conference schedule for the air show, Mitsubishi confirms the plan for the MRJ to perform a daily flight display from the opening day on 16 July.

The MRJ made its public debut at last year's Paris air show but was only displayed in the static park (pictured below). The aircraft was not present at last year's Dubai air show nor at Singapore in February. 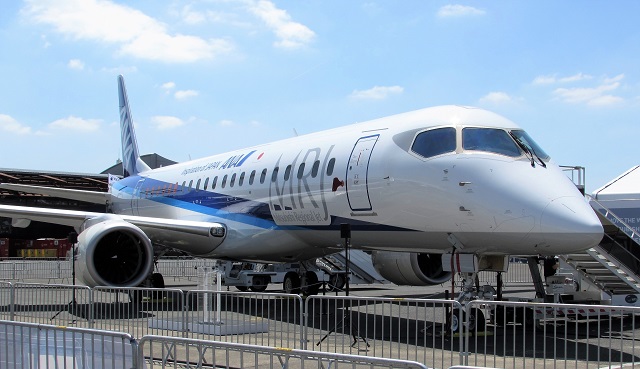 The MRJ is in the middle of an extended flight-test campaign, which involves four aircraft operating from Moses Lake in the US state of Washington and one based in Japan. Deliveries of the initial MRJ90 variant are currently scheduled to begin in 2020.