French investigators suspect a head-up guidance mode discrepancy following an incident in which a Hop Bombardier CRJ700 deviated from flightpath, and overflew Lyon airport at low level, while conducting a Category IIIa landing.

The aircraft had descended from 3,000ft towards runway 35R, in darkness and freezing fog on 23 January 2020.

Visibility was limited to just 300m and the Category IIIa approach mandated the captain’s use of the head-up display.

Standard procedures on the CRJ700 required the crew to configure the head-up guidance system and pre-arm its approach mode. The guidance system has eight operating modes, among them the ‘AIII’ mode for conducting manual ILS Category III approaches.

“The investigation demonstrated that a different mode was most likely active during the approach,” says French investigation authority BEA, but says the precise situation could not be determined.

“Use of a mode other than ‘AIII’ did not necessarily degrade the quality of the guidance, but deprived the crew of important information for conducting a CAT IIIa approach.”

The crew had disengaged the autopilot at 1,400ft and the aircraft’s approach had remained stable down to 500ft when it entered cloud, at which point the captain noticed the head-up guidance system’s flight director was indicating an instruction to bear left.

BEA says the inquiry was unable to ascertain the reason for this indication when the aircraft was stable on the approach path and the localiser signal was correct.

But the captain responded to the instruction, with four left-roll inputs of increasing amplitude at 320ft, the bank reaching 11°.

The aircraft deviated from the centreline and the captain also initiated a nose-up pitch command for about 30s which caused the jet to climb above the correct approach path. 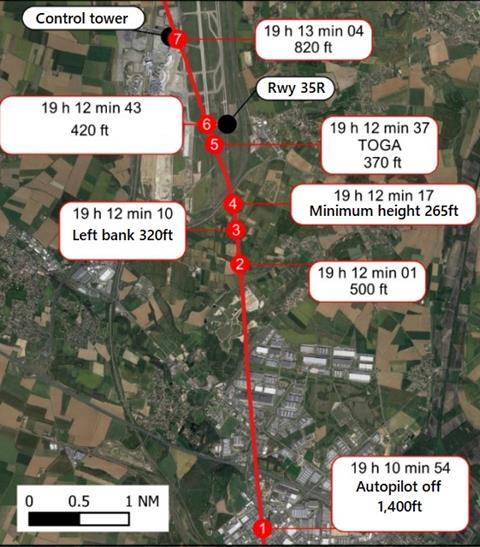 Key points during the CRJ700’s Category IIIa approach and deviation

BEA says the first officer had been distracted by a radio reception problem on his headset at the time of the left-roll inputs, and only noticed the deviation when he resumed monitoring the flight parameters.

Upon being notified of the deviation, the captain returned the aircraft to wings-level but continued to diverge from the centreline by some 20°, and the first officer suggested a go-around.

BEA says the execution of the go-around was “slow and gradual” and “did not follow the classic dynamics” of a missed approach. The aircraft lost height and decelerated to an airspeed of 120kt, about 15kt below that of the reference.

The inquiry says the slow go-around resulted from the hesitation of the crew during short final, as the captain focused on the head-up display symbols while aligning them with guidance cues, along with the first officer’s late resumption of monitoring the approach.

But BEA also points out that the use of a difference head-up guidance system mode, other than ‘AIII’, meant an ‘approach warning’ alert was not triggered – even though the conditions for such were met.

“Crews are used to initiating go-arounds as soon as this message appears,” says the inquiry.

Such was the deviation from the 35R centreline that, during the go-around, the aircraft overflew the parallel runway 35L threshold at about 420ft while on a heading of 341°.

It passed over a taxiway, aircraft parking apron, and flew close to the control tower as it climbed to 820ft.

Hop’s CRJ700, similar to this one, was approaching Lyon in darkness and freezing fog

BEA says the aircraft overflew the airport at an “unusually low altitude” but adds that it was high enough to avoid the risk of collision with obstacles.

An air traffic controller – who had told the crew to stay on course and climb to 5,000ft – asked the pilots whether they were experiencing difficulty, but was told that while there was “a little concern” over instruments, the situation was under control. The aircraft landed without further incident following a second Category IIIa approach.

None of the 71 passengers and five crew members on board the aircraft (F-GRZL) was injured.

While BEA could not explain the use of a different head-up guidance mode, it says the crew could have made an erroneous selection of mode at the beginning of the descent, or the ‘AIII’ mode simply did not arm, despite being selected, because the conditions were not met.

Alternatively, it says, the crew might have carried out a radio-altimeter test after selecting the ‘AIII’ mode, rather than before as specified in the operating manual. This would have resulted in the ‘AIII’ mode being deselected.

Cockpit-voice recorder information was not available to the inquiry, having not been preserved.

BEA adds that it could not rule out the possibility of “erratic behaviour” by the head-up guidance system’s flight director during the approach – contributing to the deviation and destabilisation of the flightpath – but it points out that such in-service malfunctions are “very rare”.