Singapore Airlines and its low-cost unit Scoot have seen a significant uptick in passenger numbers in April, on the back of a complete easing of travel curbs in Singapore and several parts of the world. 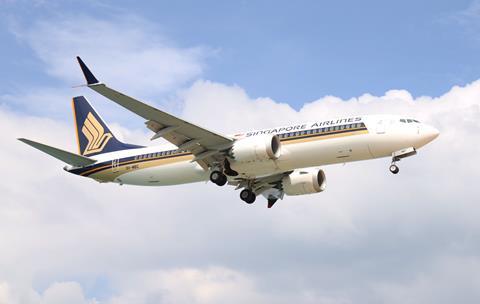 Singapore on 1 April fully relaxed border restrictions for all fully-vaccinated travellers, including doing away with all testing requirements and lifting flight limits.

Consequently, SIA and Scoot’s total capacity more than doubled year on year, and now stands at around 57% of pre-pandemic levels.

SIA Group also reported its highest-ever passenger load factor since the pandemic started two years ago, at 72.7%, a staggering 59 percentage point rise against 2021’s low base, and an 18.2 percentage point increase month on month.

The resumption of passenger flights has also led to an increase in cargo capacity, which rose about 35% year on year. However, SIA saw a slight dip - at around 2% year on year - in freight tonne kilometres, as the Chinese market was heavily impacted by strict pandemic curbs.

Singapore’s border reopening has also led to similar recovery at Changi Airport, which has seen passenger traffic hit above 40% pre-pandemic levels as at end-April. The airport is on track to meet it target of recovering 50% pre-pandemic traffic by year-end.

The airline group’s traffic results follow comments made by group chief Goh Choon Phong at the inaugural Changi Aviation Summit on 18 May, where remarked that the airline is “beginning to see the light at the end of the tunnel” following two years of the pandemic.

Goh also disclosed at the airline was operating at close to 60% capacity with 100% of its operating resources, which includes aircraft and crew.

This has allowed the airline to “be more agile” in where and how it deploys resources, says Goh.

“What used to take us perhaps weeks and months to decide - when we talk about…new destinations or additional frequencies - [now takes] a day to actually deploy,” he adds.