The Singapore Airlines Group will transfer several routes from SilkAir to low-cost unit Scoot over the next two years, with Scoot also planning to suspend its Honolulu service owing to weak demand.

Scoot’s four-times-weekly Honolulu service will be suspended from June 2019 “as a result of weak demand,” says SIA in a statement.

SilkAir will downgrade its thrice-weekly Singapore-Mandalay service to a seasonal service. It will cease this service in March 2019, and resume it in November 2019.

Also, 17 SilkAir routes will be transferred to Scoot. 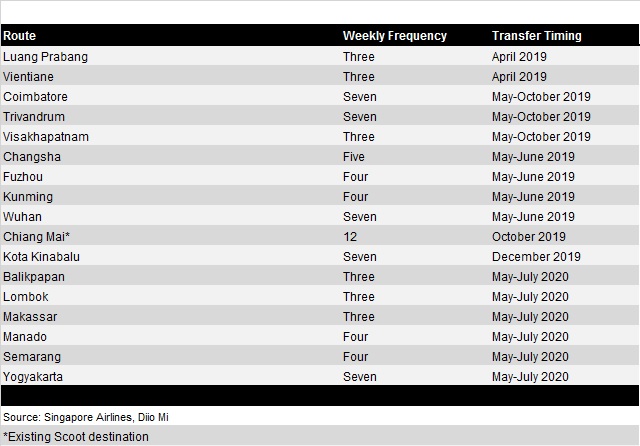 The route changes come under the aegis of the company’s transformation programme, announced in May 2018, that will see regional unit SilkAir merged with SIA.

The changes are subject to regulatory approvals. Passengers with existing bookings can switch to the new service or obtain a refund, says SIA.

“We are now at the half-way mark in our three-year transformation programme, and today’s announcement represents another significant development,” says chief executive Goh Choon Phong.

“The route review will strengthen the SIA Group for the long term, with the right vehicles in our portfolio of airlines deployed to the right markets.”

The carrier adds that the changes will better align product and service consistency across the full-service network.

The changes will see SilkAir transfer 14 Boeing 737-800s to Scoot as it continues to receive 737 Max 8 jets. Flight Fleets Analyzer shows that SilkAir operates 32 aircraft: 17 737-800s, five Max 8s, and ten Airbus A320 family aircraft. The Airbus narrowbodies are being phased out. SilkAir has orders for 32 more Max 8s.