Supersonic business jet developer Aerion Supersonic has selected several more suppliers of components for its in-development AS2 jet, which the company hopes will conduct first flight in 2024. 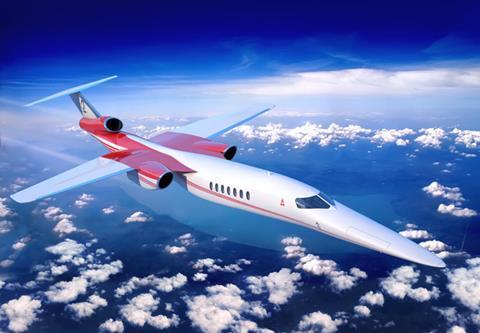 Aerion has been working toward a 2024 first flight of AS2, depicted here.

Aerion, based in Reno, Nevada, has been building a supplier base as it progresses with development of its 12-passenger supersonic AS2.

“There are doubters,” Aerion chief executive Tom Vice said in October. “But there’s going to be a day in 2024 when a beautiful aeroplane takes off for the first time, and people will sit up and say, ‘I guess it is possible’.”

Powered by GE Aviation Affinity supersonic engines, AS2 will cruise at Mach 1.4, making it capable of flying between New York and Cape Town in 9h 56min, which is 3h 39min less than “standard flights”, the company says. The engines will lack afterburners and be designed to burn 100% biofuel.

UK aerospace company GKN will design AS2’s empennage, and its electrical wiring and interconnection systems, Aerion says. That work is already underway at GKN’s sites in Nevada, the Netherlands and Romania.

Fagan had worked at Bombardier since 2005, according to his LinkedIn page. He oversaw industrial design for Global 7500s, 5000s and 6000s, and helped design the interior of the Dash 8-400 turboprop, an aircraft programme Bombardier has since sold to De Havilland Aircraft of Canada.