Air New Zealand’s pre-tax loss widened to NZ$725 million ($450 million) during its 2022 financial year compared with a pre loss of NZ$444 million a year earlier, with the carrier attributing the weakness to previous restrictions related to the coronavirus pandemic and high fuel prices.

Revenues for the 12 months ended 30 June rose 9% to NZ$2.7 billion, according to the carrier’s financial results. 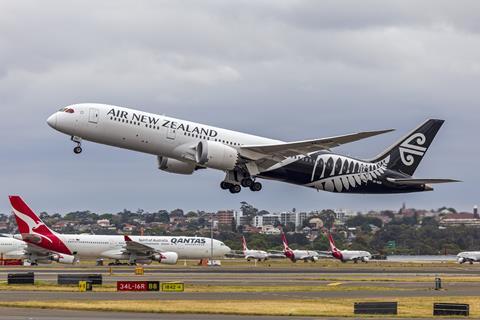 Net losses for the year more than doubled to NZ$591 million.

“Cargo and domestic revenues helped lift overall revenue by 9 percent, however high fuel prices and reduced flying over much of the year resulted in a loss for the period.”

The strong cargo result largely reflects air freight schemes instituted by the Australian and New Zealand government, which contributed $403 million – just under one half of cargo revenues. Air NZ expects cargo revenue to “moderate” as the recovery from the pandemic continues. Also, the Australian cargo scheme has been completed, and the New Zealand scheme is phasing out.

During 2022, Air NZ carried 6.8 million domestic passengers, down 16.5% from a year earlier. With New Zealand’s reopening to international travellers, however, international passengers doubled to 909,000.

“As we’ve been seeing overseas, travel demand is much stronger than anyone anticipated,” says chief executive Greg Foran.

He stresses, however, that the labour market is extremely tight, which have resulted in disruptions for passengers.

Given uncertainty in fuel prices, the risk of global recession, and inflationary pressures, Air NZ did not provide profit guidance for the 2023 financial year.

Still, it sounds an optimistic note, pointing out that 2023 will represent the first full financial year of uninterrupted passenger flying since the pandemic hit the industry in early 2020.

“Total flying capacity for the 2023 financial year is expected to be in the range of 75 percent to 80 percent of pre-Covid levels,” it says. “On this basis, the airline anticipates a significant improvement in financial performance relative to financial year 2022.”