Lufthansa’s in-house flight academy has advised student pilots to consider other careers as the industry will not require them “for a very long time”.

The message was delivered in a 29 September webcast, Lufthansa Aviation Training has disclosed. 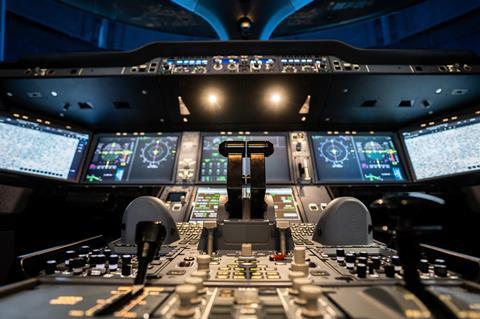 It tells Cirium: “All airlines worldwide will have no requirement for [new] pilots – with or without flight experiences – for a very long time.

“It is a matter of fairness for us to explain the industry outlook to our flight students very clearly so that they can think about alternatives at an early stage.”

LAT says that it advised students to “reorient themselves professionally”.

German pilot union Vereinigung Cockpit expects that Lufthansa will continue the training for only a “very small” percentage of students at the airline’s flight academy in Bremen, and complains that the others are being “pressurised” to make alternative career plans.

Students recruited to pursue a Lufthansa-specific multi-crew pilot licence – rather than a traditional, universal training programme toward an airline transport pilot licence – will be required to switch to “external” flight schools and accept a change to their programme, and will not be “entitled” to fly for Lufthansa later on, according to the union.

It says Lufthansa was able to select “the best” candidates for its own pilot-training programme based on the “radiance” of its brand and the job prospects within the group. Now, the union fears, student pilots completing their training outside LAT’s programme will have to undergo an assessment prior to potential future employment and carry the full financial burden of their training.

Lufthansa Group has hitherto pre-financed a majority of its pilot recruits’ training costs, which would be repaid over the course of several years in employment.

The union asserts that the prospect of candidates’ having to undergo recruitment assessment after training has never before existed at Lufthansa.

LAT says students affected by the cuts have a “fair offer to terminate the training contracts prematurely free of charge [and] are free to decide whether to accept the offer or receive further training”.

Operations at LAT’s flight schools are meanwhile on hold until “at least” year-end amid the Covid-19 pandemic, the company’s website indicates.

Bremen is one of several locations for LAT, an organisation the airline group established in 2016 to merge its training facilities in Germany, Austria, Switzerland and the USA.

Established in 1956 – a year after Lufthansa’s post-war operations began – the Bremen flight academy is used to provide ground school training for group pilots before they transfer to the company’s US locations for part of their practical training.

The Bremen school has additionally trained transport pilots for the German air force since the 1960s, as well as other airlines’ staff.

Vereinigung Cockpit believes the school’s existence is under threat. In August, the union said that the German ministry of defence was considering termination of military training in Bremen and its potential transfer to LAT’s Rostock facility.

If income from military training were to be lost, “large” parts of school activities in Bremen would be in jeopardy, the union suggests.

Unlike the school in Bremen, the Rostock one is not covered by a collective labour agreement.

In 2018, LAT recruited 500 student pilots for the parent group, the training company’s website indicates. Full-time ab initio training takes around two years until a pilot is qualified to enter an airline cockpit.