Christoph Mueller may have been at the reins of Malaysia Airlines for less than a month, but employees already have a sense of the changes to come.

In a four-page internal circular sent to all staff earlier this month, Mueller spoke about the challenges the airline is facing, warns of the painful decisions the company will have to make, and signals the hard work that needs to be put in to turn the ailing carrier around.

To him, it is clear that a new airline – complete with new uniforms, buildings, processes and a working style - will have to be built. He is brutally aware that the loss of two aircraft in 2014 means that people are not flying the airline simply because “they are frightened”.

Calibrating the business plan for the new airline is at the top of his agenda.

Mueller says MAS needs to figure out the destinations it will serve, its key markets, the aircraft it will use, its schedule, product offering and how to take on its main competitors.

FlightMaps Analytics shows that MAS still has a rather comprehensive network covering the region, Europe, Middle East, India and Australia. In the coming weeks, it will withdraw from Krabi, Frankfurt and Kochi. 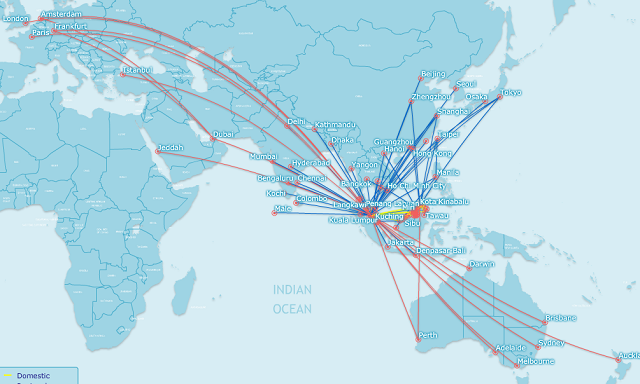 The airline is also reviewing its European and Middle East routes with a focus on network contribution and profitability. The focus will be to build on its more profitable domestic and regional routes.

FlightMaps shows that the airline’s top routes, by seat capacity, are to Kota Kinabalu, Kuching, Singapore, Penang and Jakarta.

These are however also routes where it faces cutthroat competition from AirAsia and Lion Air's Indonesian unit Malindo Air. Both of these low-cost operators have better cost structures, and have no qualms about competing on price.

Mueller says the airline is working on the assumption that it needs to retreat from some markets until it regains a competitive cost position that will allow it to compete better on price. The ultimate aim is to grow again in the last phase of restructuring.

Cost cutting will no doubt be a key element of the airline’s business plan, considering MAS’ cost level is up to 20% above those of its competitors, and with many services produced in-house at uncompetitive cost levels.

Besides possibly outsourcing some functions and partnering with specialists in certain areas, staff have also been informed that manpower cuts will be made. This uncertainty among the employees, has also led to feedback of deteriorating service levels.

Mueller warns that he airline’s 2015 financial situation is “more challenging than we all thought”. This is considering the appreciation of the US dollar, sluggish demands in certain markets despite high discounts, and competitors offering fares below costs to gain market share.

Turning the airline around, Mueller expects, will take between three and five years – a period which will require much endurance and faith.

The new chief executive is also keenly aware that “too much honesty” could also put him in conflict with Malaysian culture. The German has gone as far as to take “lessons in culture” to help him do this job most effectively.

“It is my duty to tell you today that the medicine is bitter and that the fitness programme which is required to bring us back into shape will cause a lot of sweat and sometimes tears. But it will be rewarding in the end,” he says, likening the airline’s situation to a negative diagnosis from the doctor.

“But you can be certain – I will put all my passion and dedication behind the mission until it is accomplished,” he adds.