It has been a year of contrasting fortunes for the United Arab Emirates’ (UAE’s) two low-cost carriers. All-Airbus operator Air Arabia has continued to thrive, notching up robust first-half profits and adding its first three A321LRs to its fleet of 52 A320s.

It has been a year of contrasting fortunes for the United Arab Emirates’ (UAE’s) two low-cost carriers. All-Airbus operator Air Arabia has continued to thrive, notching up robust first-half profits and adding its first three A321LRs to its fleet of 52 A320s.

The extended-range version of the A321neo has allowed the Sharjah-based airline to introduce its longest routes, including to Kuala Lumpur. It has also announced a venture with Etihad to establish a new budget operation in Abu Dhabi, and is in line to announce a major single-aisle order as early as the Dubai air show.

Flydubai, on the other hand, has been through a torrid time, mainly due to the grounding of the Boeing 737 Max in March. With its 11 Max 8s and three Max 9s languishing in the hangar and its commitment for 236 examples of the re-engined narrowbody on hold, the Dubai International-based carrier has seen its fleet of Next Generation 737s shrink to 43 from the high 50s around two years ago. 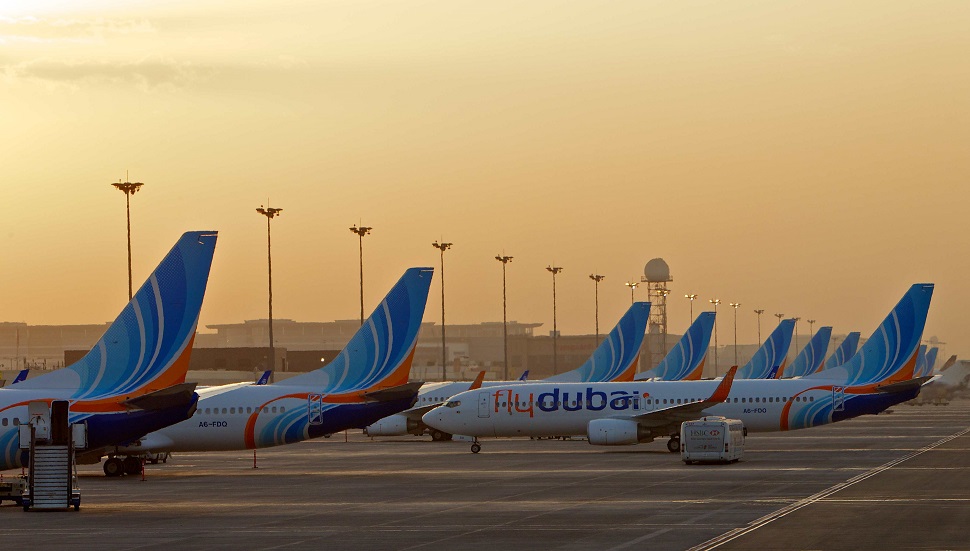 In the six months to 30 June, Emirates’ sister airline recorded a loss of just under Dh197 million ($53.6 million), with passenger numbers down 7.5% “as the result of the reduction in capacity”. The one bright light for Flydubai has been the deepening of its relationship with its sibling, begun two years ago and which has seen the low-cost carrier increase numbers of codeshare flights and relocate some of its operations to Emirates’ Terminal 3.

Some might view the collaboration as an acknowledgement that the smaller airline – which was established 10 years ago with its own management team and base at Dubai International’s low-cost Terminal 2 – is no longer seen as viable as a standalone operation. However, Emirates chief executive Sir Tim Clark insists that, despite the closer ties, a full merger between the two carriers is off the cards. “Obviously their brand has to remain separate,” he says.

However, regular Emirates passengers are getting used to occasionally boarding a Flydubai aircraft. After beginning to merge operations in 2017, there are now around 20 departures a day from Dubai International’s Terminal 3 that share an Emirates and Flydubai code. According to Clark, customers are already accustomed to a change of brand and aircraft type on the routes that both airlines serve. “The market has accepted that you might go to Mumbai on an A380 and back on a 737 on the same code – that is now working very well.”

Thirty minutes’ drive away in the emirate of Sharjah, Air Arabia chief executive Adel Ali is upbeat about his airline’s prospects, but unable to say too much about either the partnership with Etihad or the likelihood and shape of a new order – except to note of the latter that his team is in discussion with Airbus and Boeing to conclude a deal “hopefully by the end of this year or the start of next”.

Of the agreement to establish Air Arabia Abu Dhabi – announced on 16 October – Ali will only say that talks are “in progress” and he is “looking forward to being in the [UAE] capital”. No details have been released about the shareholding structure or fleet plans for the new business. Abu Dhabi will become Air Arabia’s fifth base, and its third in the UAE. It has a small operation in the northern emirate of Ras Al Khaimah, and larger hubs in Casablanca, Morocco, and Egyptian capital Cairo.

While Ali says he is “very much open to a deal with Boeing”, he acknowledges that the Max grounding is colouring discussions. “We have to wait to see what comes out of Boeing regarding the Max,” he says. “We are confident it will be back in service in time for our requirements, but part of the negotiation is around delivery, and the Max situation is putting pressure on Airbus too.”

While Boeing is likely to be making Airbus operators such as Air Arabia some compelling offers to switch allegiance as it reintroduces the damaged Max brand to service, it is Airbus that has the momentum with the Middle East’s first low-cost carrier, which was established in 2003. Ali will take delivery of three more A321LRs in the first quarter of 2020, allowing him to add capacity on denser routes, thanks to the A321’s larger, 215-seat cabin, but also to offer routes of up to 7h 30min, he says.

“We have had a contained network in the past because there was no aircraft that would help us expand our coverage, because we have always been reluctant to operate widebodies,” he says. While the Malaysian capital is its current longest flight at around 7h, Air Arabia also introduced 5h-plus services this summer from Sharjah to Tunis and Vienna. “The A321LR allows us to extend our reach east into Asia, west into Europe, and south into Africa,” he says.

Ali says the introduction of longer routes has not caused any pushback from customers in terms of the onboard experience. “We have always made sure our seat pitches – at 32in – are comfortable, and with new technology in seating, our cabin will continue to be one of the best that exists in economy class,” he says, adding that the airline’s new SkyTime in-flight entertainment system “offers passengers all that they need”. Load factors have remained “above 80% all summer” after reaching 84% in the first half of the year.

Profits for the six months to 30 June increased 47% to Dh338 million, on revenues up by one-fifth to Dh2.17 billion, something chairman Sheikh Abdulla Al Thani says “reflects the strength of the business model we operate”, despite “pressing economic challenges and escalating geopolitical tensions” during the period.

The latter, Ali acknowledges, include a “slight downturn in the economic situation in Europe with Brexit and a softer euro”, which, as its biggest market, has impacted Air Arabia’s 10-aircraft Moroccan operation. Its Egyptian base, however, which has been hit hard in the past by a decline in tourist traffic prompted by terrorism concerns, “is coming back, and things are positive”. The airline is placing its fourth aircraft into Egypt in November.

Meanwhile, a deal between India’s SpiceJet and the rulers of Ras Al Khaimah could see the UAE’s low-cost market become even more competitive. In October, SpiceJet announced that it had entered an MoU with the airport operator to “co-operate, develop and promote tourism” into the emirate, which has been without a home carrier since the collapse of RAK Airways in 2014. Air Arabia is currently the only other major airline based there.

The Indian carrier says it will launch services from New Delhi before the end of the year, but chairman and managing director Ajay Singh has suggested that destinations in western Europe might be added from his new UAE base. SpiceJet, which already connects Dubai with 10 Indian cities, operates a fleet of Boeing 737s and De Havilland Canada Dash 8-400 turboprops.

The launch comes amid turmoil in the important UAE-India market, which is fuelled by the large number of guest workers who regularly travel between the two countries, as well as significant business and high-end tourism traffic. Major operator Jet Airways, which had a partnership with minority shareholder Etihad, has been grounded since March. A number of Indian airlines, including GoAir and Vistara, have filled the void left by Jet Airways by launching new services.

For the UAE’s two established operators, much hangs on the return of the Max. Under its new co-operative relationship with Emirates, Flydubai will be determined to turn its fortunes around with a reinvigorated fleet. Meanwhile, Air Arabia’s Ali will be keen to continue his airline’s upward trajectory, either with more Airbus narrowbodies or – if Boeing’s sales team can pull off a coup – a new fleet of Max aircraft.