After more than 75 years of operating experience, the UK’s Qinetiq-run Empire Test Pilots’ School (ETPS) has recently undergone one of the biggest periods of transformation in its history, including the replacement of most of its rotorcraft fleet.

After more than 75 years of operating experience, the UK’s Qinetiq-run Empire Test Pilots’ School (ETPS) has recently undergone one of the biggest periods of transformation in its history, including the replacement of most of its rotorcraft fleet.

This process included acquiring a quartet of Airbus Helicopters H125 light-singles, delivered in the second half of 2018 and employed during course delivery since the start of this year, having replaced now obsolete Aerospatiale Gazelles. 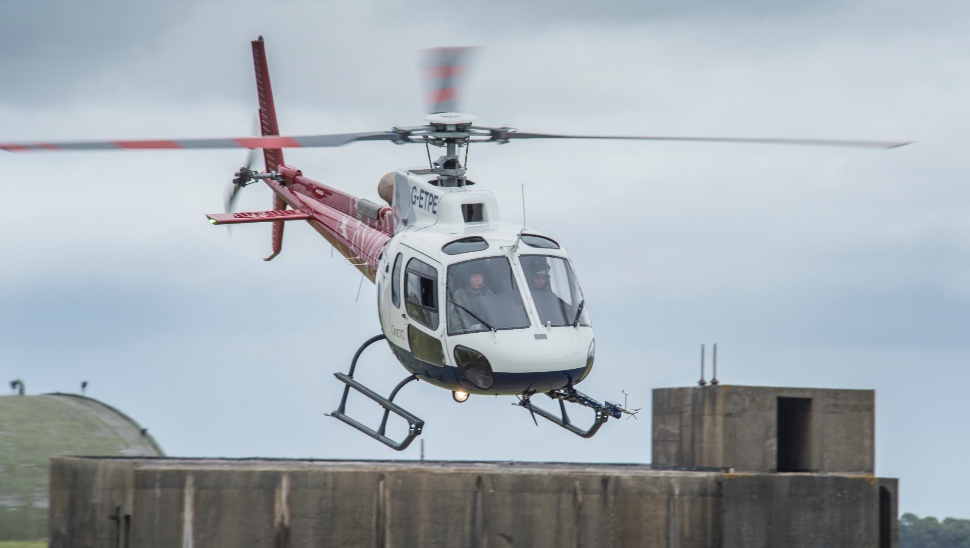 Along with a striking red, white and blue Qinetiq livery, one of the most distinctive features of the ETPS aircraft is a flight-test instrumentation boom mounted in front of the cockpit. In addition to providing detailed flight information for telemetry and debriefing purposes, this is a particularly valuable addition for gauging sideslip performance, says lead rotary instructor Eric Fitzpatrick.

Airbus Helicopters delivered its first of the new aircraft in June 2018, with all four updated with a crashworthy fuel system to boost safety.

Flight International was recently given the opportunity to fly with Fitzpatrick in G-ETPE, the school’s youngest Safran Helicopter Engines Arriel 2D-powered H125. Lasting just under 1h, our sortie was performed from the school’s Boscombe Down facility in Wiltshire on 6 September, amid autumnal low cloud and patchy heavy rain.

The left-seat pilot uses a single main instrument screen, while the right-hand seat provides access to a pair of multifunction displays. Additional screens are positioned on a centre console, and the pilot in the right-hand seat is also equipped with flight information on an iPad mini.

Unlike with the cramped Gazelle, the H125 can also comfortably accommodate up to four passengers. These can access flight information on mobile devices via an onboard wireless network.

“It used to just be dials in the cockpit – now a person in the back can be looking at it all on a tablet,” Fitzpatrick says, adding: “It has made a huge difference to our training.”

Summing it up as “a tremendous aircraft”, he adds: “The Squirrel is much better, safer, more powerful and roomy” than its predecessor.

During our flight, Fitzpatrick demonstrated the H125’s flying abilities, including handling characteristics with its “automatics” switched off, along with a practice autorotation. He also conducted approaches to Boscombe Down’s dedicated helicopter runway and associated grass landing area, and demonstrated the type’s precision handling characteristics manoeuvring near fixed markers on the ground.

Elsewhere on the airfield, ETPS students were working on height and velocity envelope aspects with the H125, including performing simulated engine failures and steep approaches.

Fitzpatrick says that such work represents “the most interesting flying we do”, and notes that although the UK military’s frontline rotorcraft fleet contains only a handful of single-engined types, such recovery techniques remain vital for pilots of twin- and three-engined helicopters.

As a result of its civil accreditation from the European Union Aviation Safety Agency and the use of G-registered aircraft, ETPS has this year implemented some operating restrictions. This includes increasing to 500ft the minimum altitude at which its aircraft can fly, unless they are accessing parts of the UK military’s Salisbury Plain training area.

In addition to its new H125s, ETPS also employs a pair of Leonardo Helicopters AW109s and a leased Bell 412. It also has access to Bell 205 and Bell 412 rotorcraft for variable-stability testing performed in Canada. Fixed-wing operations are conducted using a fleet comprising two Grob Aircraft G120TPs, a pair of Pilatus PC-21s, one Diamond Aircraft DA42 and single Avro RJ85 and RJ100 quadjets.

ETPS, operated in support of a long-term partnering agreement between Qinetiq and the UK Ministry of Defence, has provided specialist instruction to personnel from 32 nations since its establishment in 1943.