German start-up Volocopter has signed an agreement with the Dubai government to begin testing its pilotless, electric multicopter in the emirate from the fourth quarter.

The appointment forms part of Dubai’s strategy to shift 25% of all passenger travel to autonomous transport by 2030.

The trials have been scheduled to run for five years, in collaboration with the road and transport authority (RTA), says Volocopter co-founder Alexander Zosel.

The company, based in Karlsruhe, made the first manned flight of an electric multicopter in 2011. 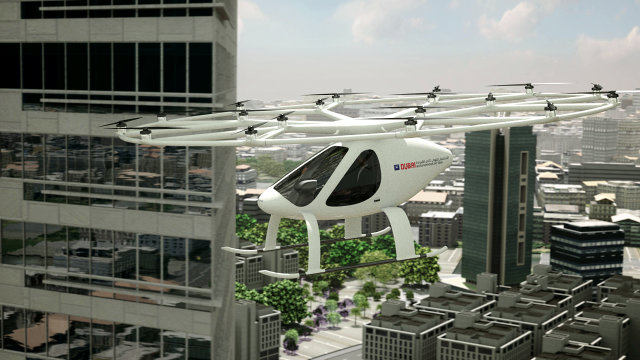 Volocopter says the Dubai air taxi trials will allow the 2X to be tested under "extreme climatic conditions".

Zosel describes the emirate as a "pioneer for a huge evolving market” for autonomous urban air taxis, and he is confident their popularity will spread to other global metropolitan areas. “We now have a fantastic opportunity to work with the RTA on the development and testing of the entire future ecosystem for safe autonomous air transport using Dubai as a first showcase project,” he says.

The 2X is designed with a flight time of 30min, a cruise speed of 27kt (50km/h) and a top speed of 100km/h. It measures about 2m (6ft 6in) in height, and the diameter of the rotor rim including propellers is about 7m, Volocopter says.