US accident investigators have determined that the fatal crash of a Bombardier Learjet 35A at Teterboro airport on 15 May 2017 was caused by the aircraft stalling at low altitude after the pilot failed to perform a go-around when the approach became unstable.

The accident was due to a number of errors and misjudgements made by the crew before and during the flight, as well as a lack of safety oversight by the charter operator, the National Transportation Safety Board (NTSB) said at a public hearing in Washington DC on 12 March. The agency presented a synopsis of the final report ahead of its scheduled publication in a few weeks. 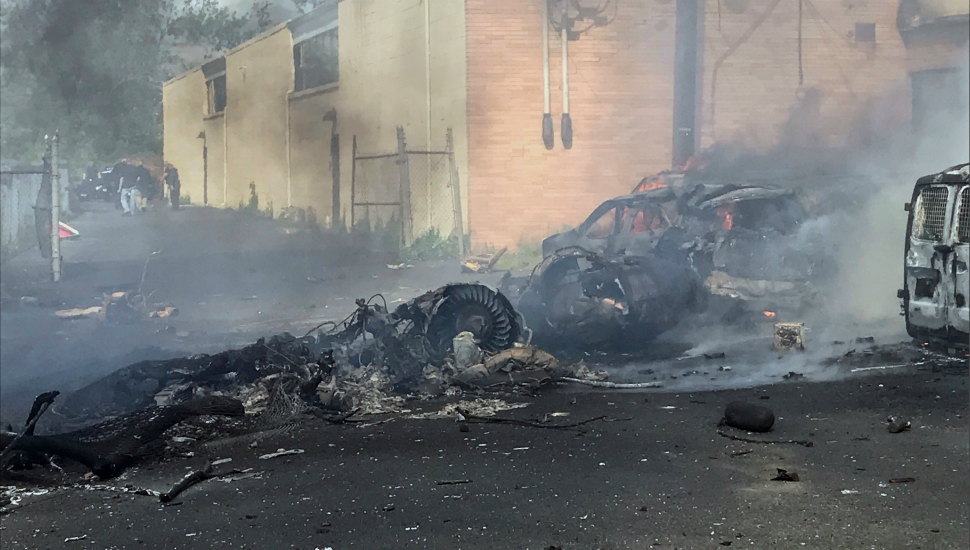 Operated by Trans-Pacific Air Charter, the 1981-built Learjet 35A (N452DA) departed Philadelphia International airport at 15:04 local time on a positioning flight to Teterboro. It crashed 25min later, around 0.5nm (1km) from the intended runway, killing both pilots – the superlight jet’s only occupants. Impact forces and a post-crash fire destroyed the aircraft.

As well as failing to perform the go-around, the NTSB says the crew “committed multiple errors” and repeatedly failed to comply with the charter company's standard operating procedures.

The flightplan contained an “incompatible altitude [27,000ft]” for the planned 28min flight – the pilots' third sector of the day – from Philadelphia to Teterboro, "which suggests that the crew devoted little attention to pre-flight planning," the NTSB says.

The captain, William Ramsey, “also failed to secure weather information for the flight leg, despite the company’s policy to do so within 3h of the flight”, it adds.

Cockpit-voice recorder data shows that Ramsey allowed his co-pilot, Jeffrey Alino, to take the controls for the majority of the flight, even though he lacked the necessary experience according to company policy.

“The pilot-in-command [Ramsey] coached him extensively, interfering with his own pilot monitoring duties, such as executing checklists and entering approach waypoints into the flight management system," says the NTSB.

On approach, the crew failed to conduct the required briefing or complete any checklists, which would have reduced their workload and provided a shared understanding of how the approach should be flown, the report says.

“This resulted in the pilots’ confusion and led to mismanaging the approach and not initiating a circle-to-land manoeuvre when instructed by air traffic control,” it says.

The NTSB found that “collectively, procedural deviations and errors resulted in the flightcrew’s lack of situational awareness throughout the flight and approach to Teterboro".

Failure to correctly set the jet's navigation equipment led the pilots to "improperly" execute the vertical profile of the approach, crossing two crucial fixes hundreds of feet above the altitudes required.

Although the crew had been vectored for an "instrument landing system runway 6, circle-to-land to runway 1 approach", the aircraft was positioned incorrectly and could not be manoeuvred to line up with runway 01.

Company procedures called for a go-around at this point, but Ramsey elected to continue the approach, initiating a turn to align with the runway despite having a lower air speed than required. During this manoeuvre the Learjet stalled and crashed, says the NTSB.

Trans-Pacific Air Charter's lack of formal safety management (SMS) programmes and oversight also played a part in the crash, the NTSB says. It says that while deficiencies were identified with both pilots during their initial training, the company failed to monitor their performance and correct patterns of poor behaviour and “procedural non-compliance”.

The NTSB recommends that the Federal Aviation Administration develop guidance for Part 135 operators to help them create and implement effective crew resource management training programmes. Additionally, it says the FAA must require Part 135 operators to develop initiatives for those pilots who have demonstrated performance deficiencies during training. These should provide additional oversight and training to address and correct these shortfalls.

Learjet operators’ manuals must be reviewed by the regulator, the NTSB says, to determine whether they contain manufacturer-recommended approach speed wind additives. The FAA must encourage those operators without that information to add it to their operations documents.