Korean Air says it has already signed a purchase agreement with Dassault Aviation “to speed up preparations for the project”, which will see the provision of four new SIGINT aircraft. 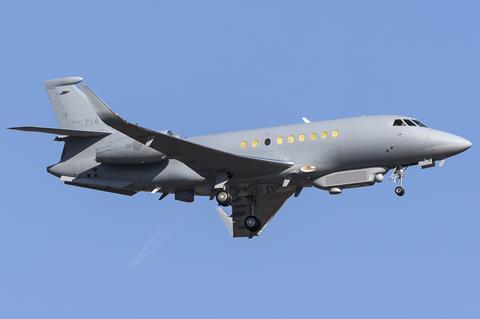 The RC-2000 SIGINT aircraft is derived from the Falcon 2000S

The second Baekdu deal, to be contracted by South Korea’s Defense Acquisition Program Administration (DAPA), is valued at W870 billion ($768 million) and will run from 2022-2026.

“Using the technology and expertise acquired through creating the first new Baekdu aircraft with L-3, a U.S. defence company, Korean Air succeeded in building the second aircraft by itself.”

The primary mission for the ROKAF’s Baekdu aircraft is monitoring communication in North Korea. Baekdu aircraft also have the ability to detect the infrared signatures of ballistic missile launches.

The aircraft are named “Baekdu”, says Korean Air, because their coverage reaches Mt. Baekdu, in the far Northeast of North Korea.