CAE is to continue its delivery of the NATO Flying Training in Canada (NFTC) programme for at least another five years, via a contract extension worth more than C$550 million ($435 million).

“The government of Canada has extended the contract for the NATO Flying Training in Canada programme through 2027,” the company announced on 2 March. “The contract extension includes a one-year option to extend through 2028 if necessary,” it adds. 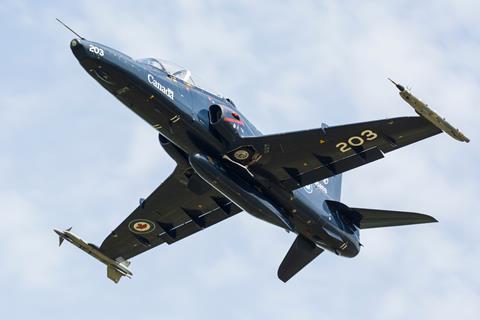 CAE notes that aligning the NFTC contract period with that of Ottawa’s KF Aerospace-provided Contracted Flying Training and Support (CFTS) programme – also referred to as Allied Wings – “will enable the government of Canada to effect an orderly transition to the next-generation Future Aircrew Training (FAcT) programme”.

Previously contracted to run until 2023, with a one-year extension option, the NFTC programme has delivered fixed-wing instruction services to the Royal Canadian Air Force (RCAF) and international allies for more than two decades. Acquired outright by CAE in 2015, it uses contractor-owned and -maintained fleets of Beechcraft T-6As and BAE Systems Hawk 155s, plus ground-based equipment.

“Since NFTC programme inception in 2000, more than 2,400 students have graduated to become military pilots, and the fleet of CT-156 Harvard and CT-155 Hawk aircraft have flown more than 450,000 hours,” CAE notes.

Ottawa’s replacement FAcT requirement has been narrowed to a two-way battle between CAE/KF Aerospace-formed SkyAlyne and a joint venture company formed by Babcock Canada and Leonardo Canada. Public Services and Procurement Canada (PSPC) issued a request for proposals to both bidders on 11 February, with a selection decision due during 2023.

“The new procurement will result in one contract covering all the requirements, including maintenance and infrastructure services. The contract period is expected to be at least 20 years,” PSPC says.

France Hebert, vice-president and general manager, CAE Canada, describes the SkyAlyne venture as “perfectly positioned to ensure a smooth, low-risk transition that delivers a world-class training capability for the RCAF and significant economic benefits for Canada”.

Ottawa’s FAcT capability will play a key role in preparing RCAF students to fly its next-generation combat aircraft fleet. A decision between the Lockheed Martin F-35A and Saab Gripen E is due to be announced later this year, with 88 of the selected type to be acquired.