Leonardo and Thales have successfully demonstrated a next-generation self-protection system suitable for integration on military helicopters and transport aircraft, through live firing trials sponsored by the UK's Defence Science and Technology Laboratory (DSTL).

Conducted at an undisclosed test range in Sweden in May-June, the activity combined a Miysis directed infrared countermeasures (DIRCM) turret and defensive aids suite (DAS) controller from Leonardo with three Thales Elix-IR threat warning sensors. The companies self-funded the systems' integration within a Terma-produced pod, which was mounted on a pole.

"As well as proving the system's basic capability, the Leonardo and Thales team demonstrated how they have optimised the threat-warning/threat-defeat chain to thwart incoming missiles as quickly as possible," the companies add. With a total flight time for such weapons being approximately 2.5s, the process is automatic.

Dave Gourlay, DIRCM campaign manager for Leonardo Airborne and Space Systems, says the system was tested against a number of "operationally-representative" missiles, including a situation where there were two weapons airborne at the same time.

Leonardo's baseline Miysis offering comprises a two-turret configuration, which once combined with a DAS controller and cockpit display unit represents a total system weight of 37.6kg (85lb). Large aircraft, such as head of state platforms, can be equipped with a three-turret solution, while light helicopters could use a single example. 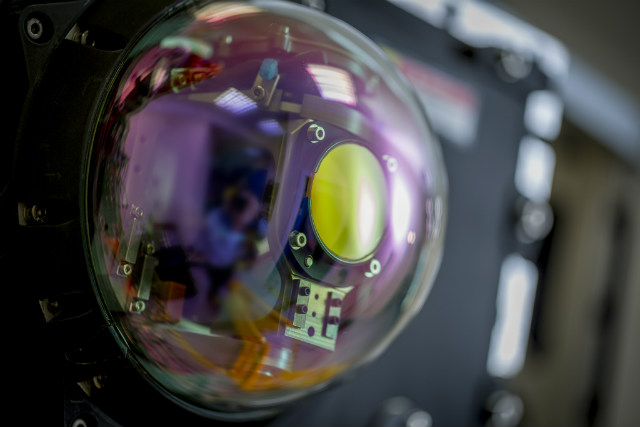 Leonardo produces the laser and pointer/tracker assembly for Miysis at its Crewe Toll site in Edinburgh, Scotland. Its customers for the product to date include the Royal Canadian Air Force, which is integrating it as part of a major upgrade to its Lockheed Martin CP-140 Aurora surveillance aircraft, and Hensoldt, which is incorporating it within its AMPS-MD self-protection system. An undisclosed Middle Eastern buyer also placed an order earlier this year, with the recipient and platform type not yet announced.

While the UK Ministry of Defence has no stated requirement for a new airborne self-protection capability, Gourlay says Miysis "has been built to take in the UK's requirements for future aircraft protection".