Sikorsky has signed a contract with the US Navy (USN) to provide 24 examples of the MH-60R helicopter to the Indian navy for anti-submarine warfare duties.

The $905 million deal with New Delhi was anticipated, having been cleared by the Indian defence ministry in February. The sale will be handled by the USN via the Foreign Military Sales (FMS) process. The first helicopter delivery to the Indian Navy is anticipated in spring 2021. 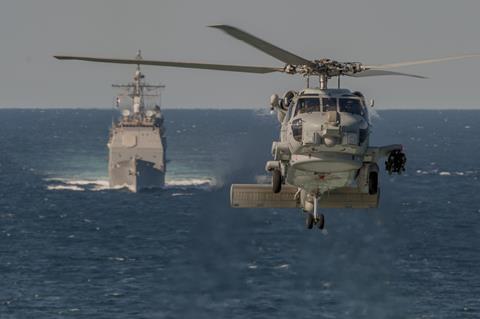 In the official US government contract notice, the USN is ordering three MH-60Rs, while India is ordering 21 examples.

“The US Navy has allowed us to leverage three aircraft from their inventory of brand new aircraft that have never been introduced into the fleet – in order to provide them to the Indian Navy so they can begin training on a more accelerated basis than might normally be possible,” says Tom Kane, director of Sikorsky naval helicopter programmes.

Sikorsky declines to say what weapons and subsystems the India’s MH-60Rs will have. However, the manufacturer says the equipment will enable anti-submarine and anti-ship warfare tasks, as well as special operations, search and rescue, utility, vertical replenishment, and command and control missions.

Previously, the helicopters were to include weapons such as Lockheed Martin AGM-114 Hellfire missiles, BAE Systems Advanced Precision Kill Weapon System guided rockets and Mk54 torpedoes and crew-served guns, according to a FMS approval notice sent to the US Congress in 2019. The package was also to include multi-mode radars, sonobuoys and multi-spectral targeting systems.

However, that former notice valued the possible deal at $2.6 billion, much higher than the package now announced, so it is not clear what weapons and related equipment would be included in the final sale.

“The initial value of $905 million as announced by the US Navy today is for production of these aircraft. Additional follow-on work is required for unique modifications and systems, which is currently going through the bid and proposal process,” says Kane, noting Sikorsky is still negotiating with the US government. “Prices can vary depending on specific requirements, unique equipment, length and scale of support, training and logistics packages.”

The main operator of the MH-60R is the USN, which has 289 examples in its fleet and plans to fly the aircraft through 2040. The Royal Australian Navy, Royal Danish Air Force, and Royal Saudi Naval Forces fly the aircraft as well.

The Indian Navy is also searching for 111 Naval Utility Helicopters to replace its ageing fleet of Hindustan Aeronautics Chetaks. Those new rotorcraft are intended for search and rescue, casualty evacuation, passenger and cargo transportation and torpedo drop roles.

India wants 95 of its Naval Utility Helicopters to be manufactured in the country. Local offsets would help replace production for the Chetak, a version of the Airbus Alouette III built in India under license.