The National Transportation Safety Board on 19 November will issue conclusions related to a dangerous though infrequent type of turbofan failure that has proved difficult to understand and tough to prevent.

The National Transportation Safety Board on 19 November will issue conclusions related to a dangerous though infrequent type of turbofan failure that has proved difficult to understand and tough to prevent.

The board is meeting to determine the probable cause of a 2018 in-flight failure of a CFM International CFM56 turbofan on a Southwest Airlines Boeing 737-700. 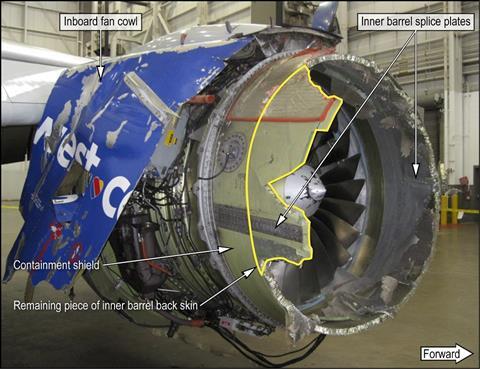 During that event one fan blade failed, and a portion of that blade flung outward and forward, toward the front of the engine, missing a containment ring designed to prevent failed engine components from exiting the engine.

The blade portion struck the engine’s cowl and engine inlet, sending shrapnel into the fuselage, which broke one window and killed one passenger.

The NTSB, which has been studying two similar incidents, may issue recommendations to prevent such failures, though a source familiar with the board’s review says solutions may not come easy.

The source, who declines to be identified due to being unauthorised to speak about the investigation, says the NTSB could theoretically require containment shrouds be extended forward to help address the problem.

But justifying modifications to thousands of in-service engines would provide a tough sell, the source says.

The NTSB tends to issue recommendations that can realistically be implemented, aware that the FAA must weigh benefits of new regulations against costs.

Any FAA assessment would pit the rarity and risk of forward-blade failures against the massive expense of requiring thousands of in-service engines be equipped with modified containment rings, a process that could significantly disrupt the industry.

And because containment rings are heavy, larger rings might necessitate modifications to other components, such as engine pylons, the source says.

Despite a broad industry review of forward-blade failures, the events have proved incredibly complex and remain poorly understood, says the source.

Containment rings, typically made from synthetic fibres, are designed to absorb energy from wayward engine components and to prevent their release.

But at least three recent failures involved forward release of engine components, which were unimpeded by containment rings.

Such events are not technically “uncontained” failures – a term meaning that blades penetrated the containment ring.

Though such events are rare, the 2018 Southwest event caught the attention of the industry and aviation safety experts, including the NTSB. That event resulted in the first death of a passenger on a US airline in nearly 10 years.

The NTSB has been investigating two other engine failures, in 2016 and 2018, that similarly involved shrapnel that shot forward, missing containment rings.

Story corrected on 19 November to note that the 2018 Southwest CFM56 event involved failure of a single fan blade, not multiple blades, and that only a portion of that blade flung forward.