The National Transportation Safety Board has urged regulators to require that Boeing redesign the 737NGs’ engine fan cowl structure to ensure integrity in the event of a fan blade failure.

The National Transportation Safety Board has urged regulators to require that Boeing redesign the 737NGs’ engine fan cowl structure to ensure integrity in the event of a fan blade failure.

And Boeing already says it intends to make the changes, which are only recommendations to the Federal Aviation Administration.

The NTSB issued several other recommendations during a 19 November hearing into the 2018 failure of a CFM International CFM56-7B turbofan on a Southwest Airlines 737-700. That event killed one person.

The board also recommends airlines be required to retrofit in-service 737NGs with the redesigned cowl and that Boeing equip new-built aircraft with the change. The 737NG is nearly out of production.

The NTSB also urges the FAA to require that engine makers and airframers jointly study the effects of engine blade failures on surrounding components.

The NTSB makes no recommendations specific to CFM or Boeing’s 737 Max, which is powered by new-generation Leap-1B turbofans. The board also does not recommend changes to the CFM56’s containment ring.

“The accident demonstrated the susceptibility of the fan cowl installed on Boeing 737 Next Generation series airplanes to a fan-blade-out impact,” says the board in a statement read aloud during the hearing.

Boeing is designing a fix.

“Boeing is working on a design enhancement that would fully address the safety recommendation from the NTSB,” says the airframer, which faces immense pressure to resolve problems with its newer 737 Max. “Once approved by the FAA, that design change will be implemented in the existing NG fleet.”

“All 737NGs are safe to continue operating normally as the issue is completely mitigated by fan blade inspections,” Boeing adds.

The FAA says it “will carefully review and respond to the NTSB recommendations”.

The NTSB determined the cause of the 2018 incident was “low-cycle fatigue cracking in the dovetail” of a fan blade, which separated from the hub and caused a reaction that shattered the engine’s inlet and cowling.

The NTSB described the failure in detail during the hearing.

After separating, the blade impacted the bottom of the engine case – at the six o’clock position, which board chair Robert Sumwalt calls a “critical” location.

A component called the “radial restraint fitting” transferred the impact’s energy to the cowling, which then fractured, says NTSB structures expert Brian Murphy.

As the cowling broke apart, the “inboard fan cowl aft latch keeper” struck the aircraft’s fuselage near a window. That impact broke a cabin window, resulting in rapid decompression during which one passenger died after being sucked partway out of the cabin, the NTSB says. 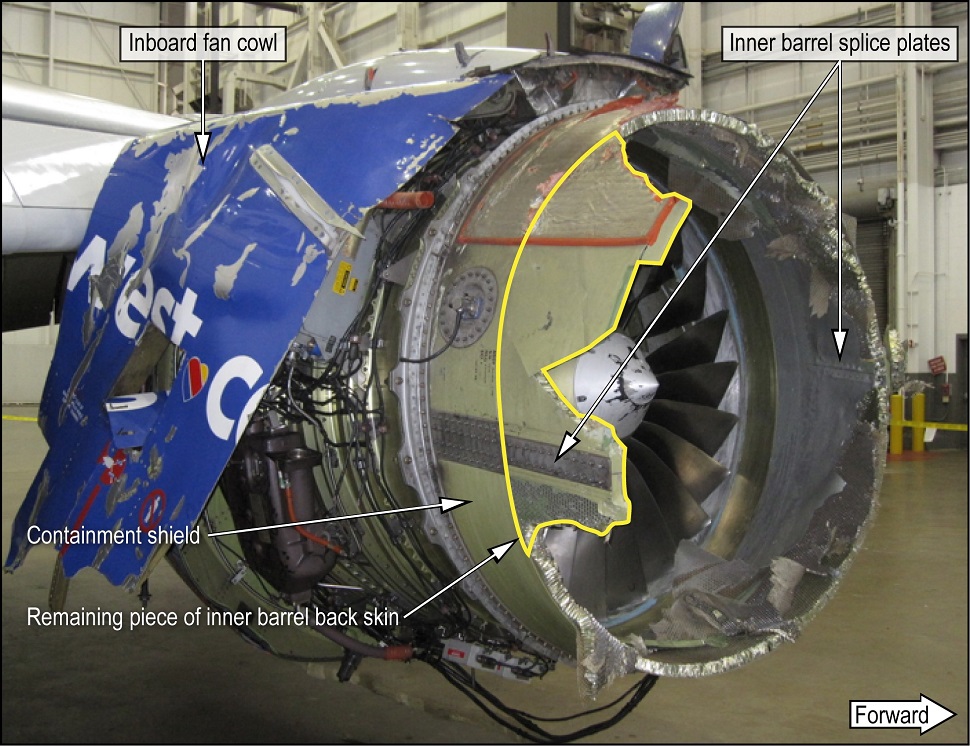 Murphy says the radial restraint fitting’s purpose was to help flatten the bottom of the CFM56 turbofan. The flat-bottom design allowed Boeing to address ground clearance issues that arose when it re-engined the original 737 with CFM56s.

Those fan portions struck the CFM56’s inlet inner barrel. That impact, combined with a “displacement wave” caused by the blade’s impact with the fan case, caused the inlet to separate from the aircraft, says the NTSB.

The incident was not an “uncontained failure” in the term’s technical sense because the engine’s containment shield did contain the part of the blade that hit it.

“The blade was contained, but unfortunately, the cowling was not, so the end result was exactly the same,” says board member Bruce Landsberg.

CFM, a partnership between GE Aviation and Safran Aircraft Engines, declines to specifically comment about the recommendations.

“Our standard practice is to develop and certify engines in close collaboration with our airframe partners, working within the appropriate regulatory framework,” CFM says. “We will continue to strictly comply with regulatory requirements, including any changes that might be adopted as a result of NTSB’s recommendations.”

“This blade did not perform as CFM and probably Boeing had intended,” says Sumwalt.

NTSB powerplant specialist Pierre Scarfo says containment tests performed during certification can be engine-only tests – they might not include the same components that will surround the engine when on the airframe. Often, airframers use data derived from containment tests to predict potential surrounding damage.

Former NTSB board member John Goglia says the NTSBs’ recommendation to redesign the cowl only “partly addresses” the problem. He suggests containment rings might be expanded to better capture forward-flung engine components.

Scarfo says CFM56 “fan blade out” events are extremely rare – only two have been reported during a combined 400 million flight hours and some 200 million cycles. The other event, in 2016, also involved a Southwest 737-700.

Fluorescent-penetrant and numerous visual inspections failed to detect flaws in the Southwest blades, but Scarfo insists the newer, advanced techniques are sufficient to discover flaws.

“Confidence is high that new inspections will detect cracks,” he says.