Airbus to cut A330 output and keep A350 rate level

Airbus is to cut production of its A330 line to 40 aircraft this year, and will keep A350 monthly output to between nine and 10 aircraft.

The decision is a consequence of “overall customer demand” in the twin-aisle sector, says the airframer.

Chief executive Guillaume Faury, speaking in Toulouse on 13 February, said the airframer “wanted to have a level of production reflecting demand moving forward” and that the decision reflected Airbus’s understanding of the “capacity of the market”.

Softer long-haul demand has been reflected in rival Boeing’s plans to cut 787 monthly production from 14 aircraft to 10 in 2021. The US airframer attributed this to Chinese trade tension and lower near-term replacement demand.

Airbus delivered 53 A330s last year, including 41 of the re-engined A330neo. But Faury says a “lot” of the A330 deliveries last year involved aircraft originally produced in 2018, for which delivery was then delayed.

He says he is “confident” that the airframer is planning fro the “right level” of deliveries. 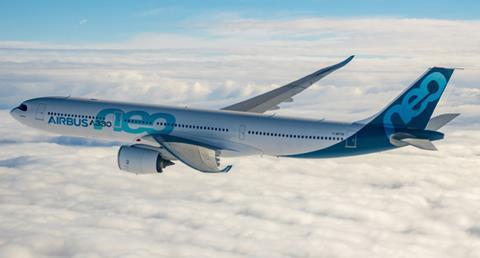 All of the A330neo deliveries to date have involved the larger -900 variant. Certification of the -800 has yet to be completed.

But Airbus chief executive Guillaume Faury says the airframer expects developments on the type certificate for the A330-800 “very soon”.