Wizz Air UK has revised its return-to-service processes after an Airbus A321, whose crew aborted take-off at high speed, was found to have a pitot probe blocked by insect activity.

The aircraft (G-WUKJ) had reached 120kt – the V1 decision speed – during its departure roll from runway 20 at Doncaster, when the captain noticed the airspeed reading on his primary flight display had dropped to zero.

He ordered a rejected take-off with maximum reverse-thrust and automatic braking, the A321 slowing below 30kt about 1,200m from the beginning of the runway. 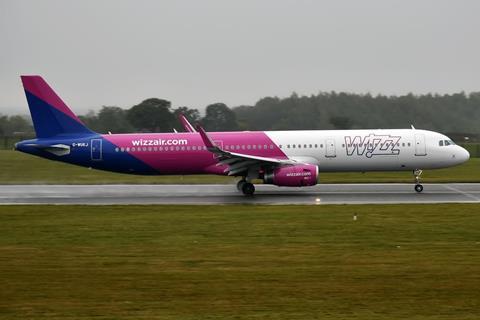 Although the air-data system was subsequently checked, a second attempted take-off was also aborted, at low speed, for the same reason.

Over the next two days the aircraft was inspected before three insect larvae, the size of a rice grain, were found in one of the pitot probes.

The UK Air Accidents Investigation Branch says the pitot probe covers do not completely seal the probes, because this could increase pressure in the air-data system – causing the aircraft to interpret the measurement as actual airspeed and deploy the ram-air turbine if the jet is electrically-powered.

But the inquiry has not determined when the larvae might have been deposited in the probe.

The incident occurred on 16 June, during a ferry flight to London Stansted, after the aircraft had been parked for 12 weeks following the onset of the pandemic.

The A321 had been parked on a remote stand at Doncaster since 25 March, and had been prepared for storage in flight-ready condition, by a local maintenance organisation, in accordance with the aircraft maintenance manual.

Its air-data system had been flushed on 9 June – a week before the incident – and on 15 June a work package was performed preparing the twinjet for return to service. Its pitot covers, fitted at the time of parking, were removed.

No faults were discovered by the captain and first officer, who had conducted an extended walk-round given the jet’s long period in storage. The two pilots were the aircraft’s only occupants.

Wizz Air UK has since introduced a requirement to flush all total and static pressure lines before returning to operation any aircraft that has been parked for more than three days. The inquiry adds that the carrier is looking to identify “better pitot probe covers” that might offer improved protection.