Erroneous indications within the same speed range could arise from false information being derived from two or three blocked pitot probes.

Airbus computational simulations, conducted as part of its continuous development testing, has found that the aircraft’s response could be affected by such a situation, especially during rotation.

This could lead to an “unstable flightpath” after take-off and possible reduced aircraft control, says the European Union Aviation Safety Agency.

While EASA says the condition has “not been encountered” during operations, it is particularly concerned over occurrences as aircraft return to flight from long-term pandemic-related storage.

Several incidents involving pitot-static system blockages – such as those caused by insect nesting activity – have already been recorded. 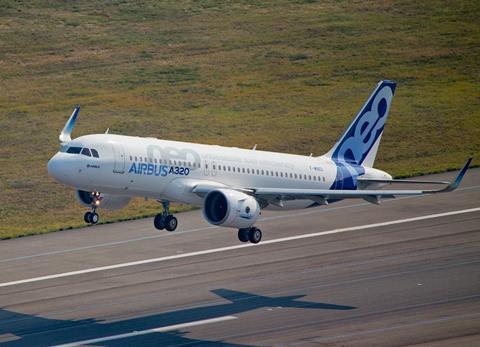 “An increasing number of operational disruptions have been reported, due to airspeed discrepancies,” warns EASA in a 21 June directive.

Airbus is reinforcing the need for airspeed checks during take-off, as a result of its analysis, and providing instructions to abort take-off in case of unreliable airspeed detection.

It is also issuing a temporary revision to the minimum equipment list requiring the standby airspeed indicator to be operational.

EASA is ordering A320neo-family operators to incorporate both the procedural and minimum equipment revisions into their documentation.