European flight simulation specialist Euramec will take delivery of its first recycled Airbus A320 cockpit imminently which it will re-engineer into a flight-training device (FTD).

Bert Buyle, chief executive of the Belgian company, told FlightGlobal at the Singapore air show that Euramec has signed an exclusive agreement with Ostend-based recycling specialist AeroCircular to take entire A320 cockpits from retired aircraft. “We have an agreement to take the complete cockpits with everything inside,” he says. 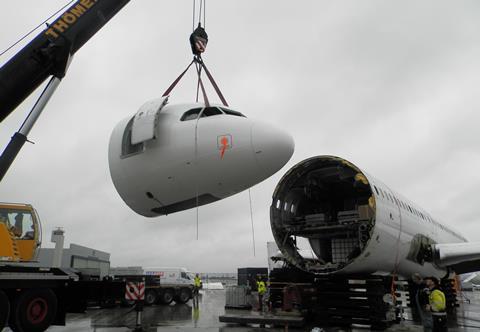 The first cockpit – one of an initial batch of three it is taking from AeroCircular – will be delivered to Euramec imminently. “We will then replace the original display units with devices made by us. We also rewire the panels to interface with our systems.”

The agreement will be extended to other narrowbody types like the 737 when aircraft become available. Euromec will sell the “upcycled” cockpits from €380,000 ($414,000), depending whether they are certificated to FTD 1 or FTD 2 level, which determines what type of training they can be used for.

Buyle says Euramec aims to sell up to five devices a year. “We are currently negotiating with our first customers – targets include flight schools and airlines.”

In parallel, Euramec is developing its “Flyright” concept where it packages the devices with its training processes to instruct pilots, engineers, air traffic controllers and cabin crew. It is working on a proof of concept using its existing Boeing 737 fixed-based trainer and will offer the packages as franchises globally.