Indian low-cost carrier IndiGo swung to a net profit in the three months to 31 December 2021, ending a series of loss-making quarters as demand improved amid a Covid-19 recovery that has faltered slightly as 2022 begins.

“I am pleased that we were able to report a profit for the third quarter,” said IndiGo chief executive Ronojoy Dutta as the earnings were released on 4 February. “It demonstrates that our business model is fundamentally strong.” 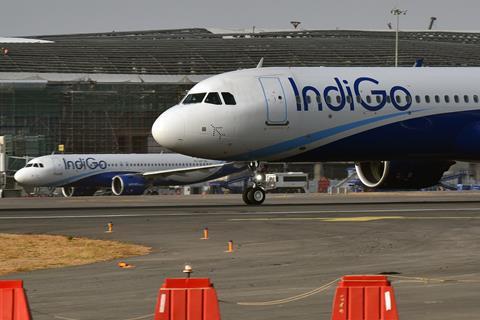 Total income of Rs94.8 billion was up 84% year on year, but down on the last equivalent pre-pandemic figure of Rs103 billion. Costs were up 62% year on year at Rs93.5 billion in the most recent period, compared with Rs97.7 billion in the same period of 2019.

Capacity of 23 billion available seat kilometres (ASKs) during the quarter was up 50% year on year, as it approached the equivalent 2019 figure of 25.8 billion.

IndiGo notes, however, that its fiscal-fourth-quarter ASKs are expected to drop by around 10-15% compared with the third quarter total. It has previously said that the Omicron variant of Covid-19 was having a short-term demand impact in the first weeks of 2022.

With traffic at 18.3 billion revenue passenger kilometres for the three months, the carrier achieved a load factor of 79.7%. The latter figure was up from 72.0% year on year, but was behind the 2019 figure of 87.6%.

During the third quarter it operated services to 84 destinations, including 23 international cities.