The 2h 5min sortie commenced 10:15am on 27 December during which 30 tests were conducted, according to the official China Daily quoting Comac. 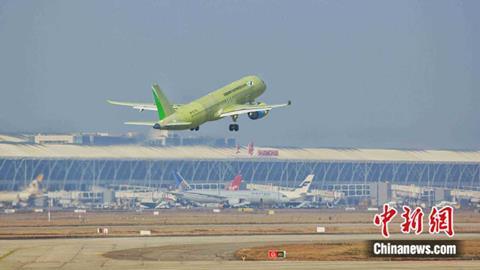 The sixth prototype of the C919 narrowbody takes off on its maiden flight.

The aircraft, numbered 106, joins five other prototypes in the test campaign of the narrowbody type. Production has already commenced on customer aircraft.

FlightGlobal understands that the C919 is likely to enter service in 2021 or 2022, a delay compared with the originally planned timeframe of 2020-2021.

The launch customer for the type will be Shanghai-based China Eastern Airlines.