Despite the industry-wide upheaval caused by the coronavirus pandemic, Chinese airframer Comac broke new ground in 2020. 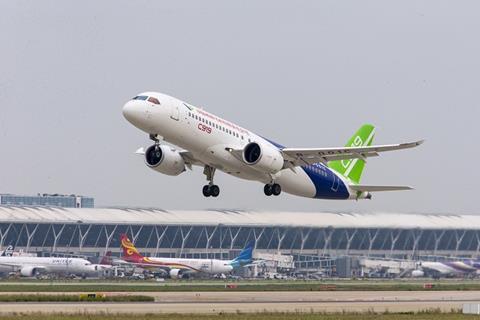 Will 2021 be the year the Comac C919 finally enters service?

Fresh off a high in 2020, Comac will be pinning high hopes on the C919 programme, which it hopes will compete with the Boeing 737 and the Airbus A320 family.

Already, the full test fleet of six prototypes are up and flying, and, as at the end of November, the Chinese airframer received the type inspection authorisation for the programme, paving the way for final flight testing and certification.

Comac is also looking to get the C919 certified and delivered to launch customer China Eastern next year, in what is the clearest indication of timelines since it quietly acknowledged a shift in dates in 2019.

FlightGlobal reported in 2019 that the C919 timeline had been shifted to the right, as Comac needed about two to three years for certification and delivery. This meant that the narrowbody is likely to enter service in 2021 earliest, instead of 2020.

However, a looming sanction war between China and the US could threaten to derail progress on the narrowbody programme. The tit-for-tat came about after the US approved billions of dollars in potential arms sales to Taiwan, which China regards as its own, but is also part of a long-brewing trade war between the two superpowers.

A US-China aerospace breakup — where China blocks US-made passenger aircraft and related aerospace components from being sold in China — could cripple the C919 programme, creating what observers says would be a “nightmare scenario”.

Indeed, much as 2021 could see Comac break new ground, a new year with tough sanctions on US aerospace products could also break Comac, effectively clipping the wings of its C919 programme for a few more foreseeable years.

Still, Comac can take comfort in the fact that it is still in a cushy position, at least compared to its peers.

Mitsubishi Aircraft, its rival airframer from Japan, will enter 2021 with its flagship SpaceJet regional aircraft in an effective programme freeze. Even if economic conditions improve in 2021, it seems unlikely that Mitsubishi will restart the programme — at least not immediately.

The company said in late October: “We will work to review where we stand, make improvements, and assess a possible programme restart.”

If 2020 was the year Asian airframers treaded diverging paths, 2021 will continue to see a different trajectory for both Chinese and Japanese airframers.