Abu Dhabi’s signage suppliers have been kept busy at the aircraft engineering complex next to the city’s international airport during the operation’s transitions through many identities. Originally Gulf Aircraft Maintenance Company or GAMCO – the third-party MRO division of Gulf Air – it was renamed Abu Dhabi Aircraft Technologies (ADAT) shortly after Abu Dhabi pulled out of the Gulf Air consortium in the mid-2000s. ADAT was positioned as the region’s premier third-party engine and airframe MRO provider, with new flag carrier Etihad as its anchor customer.

Abu Dhabi’s signage suppliers have been kept busy at the aircraft engineering complex next to the city’s international airport during the operation’s transitions through many identities. Originally Gulf Aircraft Maintenance Company or GAMCO – the third-party MRO division of Gulf Air – it was renamed Abu Dhabi Aircraft Technologies (ADAT) shortly after Abu Dhabi pulled out of the Gulf Air consortium in the mid-2000s. ADAT was positioned as the region’s premier third-party engine and airframe MRO provider, with new flag carrier Etihad as its anchor customer.

In 2014, with Etihad’s fleet and family of associated carriers growing, the airframe side of the business was spun off as Etihad Engineering, becoming the in-house MRO division of the airline, while the engine operation was rebranded as Turbine Services & Solutions (TS&S), a separate business specialising in aero propulsion and industrial gas turbines and continuing under the management of Abu Dhabi state investment fund Mubadala, which had run ADAT. Finally, in May this year, TS&S was rebranded as Sanad Aerotech, “sanad” meaning “support” in Arabic. 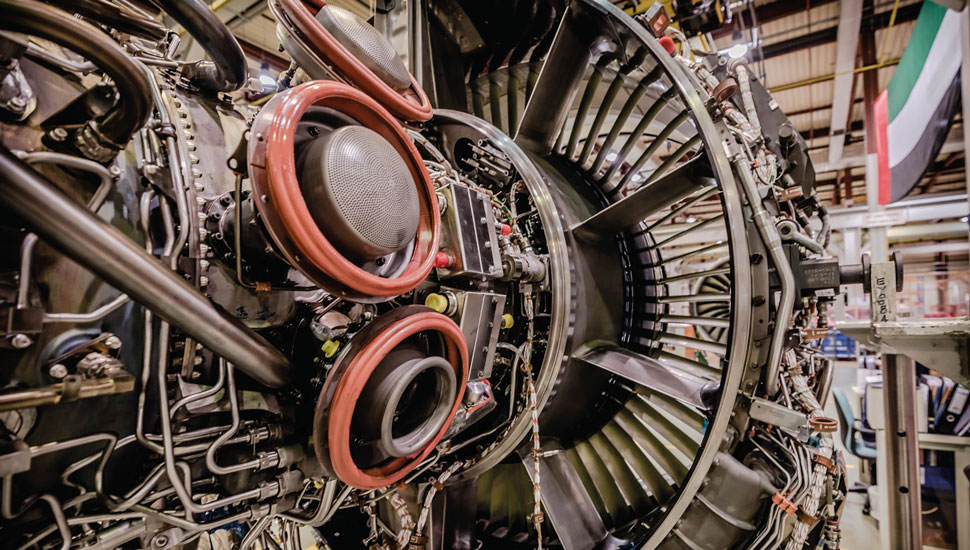 Under its new guise, Sanad got off to a good start during June’s Paris air show when it became an authorised maintenance centre for the Airbus A330’s Rolls-Royce Trent 700. Although Sanad had been overhauling Trent 700s since 2013 – including those powering Etihad’s own A330 fleet – it said the deal would more than triple its annual throughput from 22 units to 75, one-quarter of global Trent engine MRO demand. Before June, Sanad had overhauled around 90 Trent 700 engines, but it expected this number to rise to 600 over the nine-year contract period.

Chief executive Mansoor Janahi describes the agreement with the UK aero engine giant as a “key landmark” and “our largest contract to date”, which has “reaffirmed our position as the world’s only independent Trent 700 MRO facility”. He adds: “The majority of today’s fleet of A330 aircraft in operation are powered by this engine, so this provides a strategic avenue for business growth by expanding the support Sanad Aerotech offers its global clients.”

The International Aero Engines V2500 that powers about half of all the previous-generation Airbus A320s in service is another important programme for Sanad. Also at Paris, the company added Russia’s Nordwind and BH Air of Bulgaria to its client list. Nordwind committed to having up to 14 of its V2500s overhauled in Abu Dhabi between now and 2022, while Sanad was due to overhaul five of the IAE engines for BH Air during 2019.

Sanad says it has worked on more than 300 V2500s since its split from the former ADAT, with year-on-year growth on the programme of more than 20%. According to Janahi, Sanad has been able to “leverage strong trade relationships between the UAE and other countries, including Russia and Eastern Europe”. He adds: “This is a growing market, with convenient logistics lanes that support our penetration into these markets.”

The Abu Dhabi flag carrier, currently going through its own restructuring following a series of ill-fated international airline collaborations, remains an important customer for Sanad, which, apart from the airline’s own Trent 700s and V2500s on its A330 and A320 fleets, also maintains the GE Aviation GEnx engines on its Boeing 787s. “While [Sanad and Etihad Engineering] engage in two distinct activities, synergies continue to take place with Etihad Airways,” he says. “The legacy created through our Etihad relationship is a vital platform that has created opportunities in terms of OEM and other airline partnerships we have today.”

Over the past 20 years or so, the engine manufacturers have increasingly seen the aftermarket as their most lucrative revenue stream. But Janahi does not see this as a threat and says MRO providers such as his can happily co-exist in an expanding market. “Sanad Aerotech’s business strategy is focused on strengthening our long-term partnerships with OEMs and global airlines,” he says. “It’s a key component of our past success and will be a core contributor to our pending growth in this sector.”

With the global airline market set to continue growing, current MRO capacity will “struggle to accommodate the expected demand requirements”, he says. “Our focus on engines and our diverse product mix positions Sanad Aerotech to adapt to and facilitate this demand. We work with a diversified product mix that ranges from next-generation engines such as the GEnx to mature engines such as the Trent 700 and the V2500, both of which are still strong forces in the market.”