The concept of big data and predictive maintenance has echoed around industry boardrooms for several years. In its most ideal form, massive streams of data are pumped from aircraft in real time. On the ground, networks equipped with artificial intelligence (AI) use machine learning to make sense of it all and provide actionable maintenance suggestions before a part fails.

Similarly, equipment failures and alerts can be fed to the system, creating a far better understanding of the conditions that lead to equipment issues and, worse, the dreaded aircraft on ground (AOG) situation.

Unfortunately, this ideal may be some way from realisation. Airlines, airframers, and maintenance, repair and overhaul (MRO) firms continue to grapple with a range of issues. Technological issues include legacy fleet types, data transmission and the development of tools to allow for accurate predictive analysis – timing avionics failures is particularly challenging, if not impossible.

And although data will some day be king – in theory, anyway – people are still firmly in the picture.

One of the oldest human inventions – the law – is markedly unclear on the ownership of raw commercial data. On the face of it everyone agrees that airlines own the data their aircraft produce. Yet airlines fret that the industry's manufacturers, which make no secret of their aftersales ambitions, will use their vast pools of data at the expense of customers. Should a manufacturer take an airline's raw data and run it through a comprehensive analytics programme, the output is the intellectual property not of the airline, but of the manufacturer.

Moreover, companies in all industries are increasingly wary of sharing data. In the airline context, a disinclination to share all data – bar that required for safety – may curtail the growth of global pools that reflect fleet operations. Airline chief executives could well be wary of releasing data that could expose weaknesses and strengths in their carriers' operations. 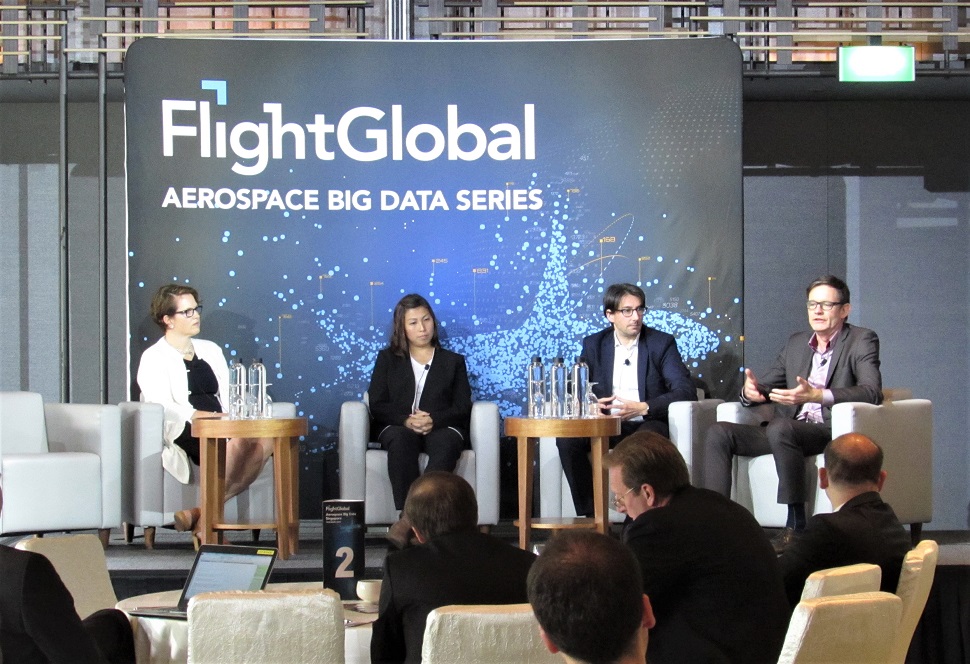 At FlightGlobal's recent Aerospace Big Data conference in Singapore (above), high ranking delegates from across the aerospace industry grappled with these topics. The discussions covered a range of areas, with five major themes emerging.

While the term "Big Data" conjures images of AI using machine learning to create predictions of superhuman accuracy and wisdom, the truth is more modest.

"In theory, they should get together at the pub for a beer to get to know each other, but this never happens," said one delegate with long experience in the sector.

Another issue is big data training. While large, profitable airlines can afford to train staff in the value of data for maintenance, many airlines lack the resources for this. Some maintenance staff are indeed dubious about data-driven conclusions. There may also be a concern among senior management about removing parts before they fail, as this can be construed as wasting money.

With big data analytics being widely used across many industries, retention is another issue that operators may have to deal with. Some participants noted that they had to compete with technology companies, big pharma and other advanced industries when trying to attract the right skills to help build systems that can process, model and deliver insights from big data.

WHO GOES FIRST? WHAT IS THE ROI?

In a series of round-table discussions, one group asked a tough question: "Who goes first?"

While airline chief executives generally see the benefits – reduced AOGs and delays – there is some reluctance to embark on major IT projects that have an uncertain return on investment (ROI).

"It will take a brave chief executive to invest in this… what is the ROI?" is an often-posed question

Should the initiative prove successful, competitors will soon piggyback on the innovator's ideas.

This is compounded by concerns about cybersecurity, especially for data that is hosted in the cloud, and that data shared could have commercial value beyond its usefulness in maintenance.

Some delegates feel that there is too much emphasis on how big data analytics and predictive maintenance can prevent extreme AOG events, when these tools are equally applicable to base maintenance and other functions. One example cited a carrier that was able to use analytics to deliver over 1,000 man-hour savings a year in base maintenance.

That said, the group ended on a positive note: "We’re confident we’ll get there, but not sure when."

Possibly the hottest topic of discussion was over data ownership.

Most operators consider that they should naturally own the data coming from their operations, but the airframers and engine manufacturers claim ownership of analysed, refined data. That can limit the amount of insight that an operator may gain, or alternatively give a potential "upside" from the insights gained to that manufacturer.

Big data, by its nature, is enhanced when multiple data points come together to feed larger analytical models. That will require additional standardisation between airlines, OEMs and suppliers to ensure that data can be consistently fed into processes to derive actionable insights.

One airframer noted that once standards are established, there will still be concerns between airlines over their own interests that need to be addressed. But the potential payoff from doing that – perhaps moving into a world of "zero AOG" could be possible.

"It is really not magic, it is really about learning, accepting and how much risk we are willing to take, and that can differ from airline to airline, and we are working with them to drive towards zero AOG," said the delegate.

In some ways, the aviation industry has been better positioned than other sectors to acquire data from its operations, given the strong uptake of sensors, the use of recording devices, and the ability to transfer that data – all of which have long been fundamental to aircraft design. Adding to this is the growth of AI, machine learning and intuitive algorithms, which have the potential to add more value than ever to the industry.

"The processing of raw data into wisdom has always been done, but there are quite a few things that are disruptive these days, and it is changing the way we put together data and mine engineering insights from them," said one speaker.

While that may be fine, a number of delegates pointed out that analytics may only be valuable if an "actionable insight" emerges.

And even when they do, there needs to be a focus on how insights and predictions can be put in the hands of the technicians that carry out maintenance on the fleet. In some cases, a technician may be hesitant to remove a part that has not failed yet, but may be predicted to fail soon. As such, a number of speakers noted that there had to be "strong buy-in" across the organisation for Big Data to deliver the value that it claims.

KEEPING IT – AND OT- SECURE

For all the discussion around data, the conference ended with a presentation by Ganesh Narayanan, senior manager critical infrastructure security at Accenture on the growing risks that airlines and other players in aviation face around data security.

It was apt, given recent disclosures by carriers such as Singapore Airlines and Cathay Pacific of major data breaches. Those, worryingly, only look set to grow worse. Operators need to be ready to respond.

"We have to respond to an attack. Gone are the days of preventing an attack, but we have to be ready to respond," said Narayanan.

At the same time, he also noted that with all the focus on information technology there needed to be adequate protection for operational technology. That refers to the machines and technology used in day-to-day operations that may not necessarily be internet-connected, but remain critical to the aviation ecosystem.

As such, carriers need to extend the security boundary to devices such as bag scanners, boarding card readers and the like, most of which operate on unsecure standards and could be used by some actors to create a nuisance, and potentially massive disruption.

By Ellis Taylor and Greg Waldron