Carrying the service registration 01, the surveillance aircraft is the first of four examples on order for the Royal New Zealand Air Force. Auckland will use the heavily modified narrowbodies to replace its current five Lockheed Martin P-3K Orions. 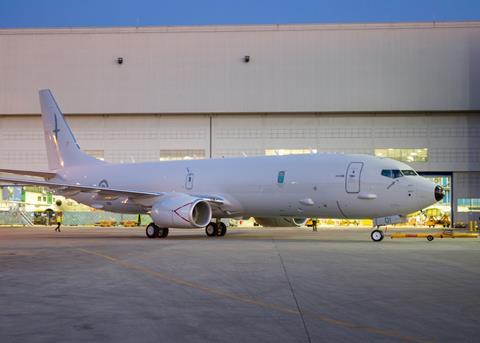 “The P-8As will provide advanced capabilities to maintain situational awareness in neighbouring waters on and below the surface of the ocean,” the airframer says.

“First flight is scheduled in the coming weeks, followed by mission systems installation. The aircraft is scheduled to be delivered to the New Zealand Ministry of Defence later this year.”

New Zealand will join a growing list of nations in operating the P-8A, with current users including Australia, India, Norway, the UK and the USA, and Germany and South Korea having also signed contracts to acquire the type.