The US Air Force (USAF) has started searching for a new airborne command, control and communications operations center to replace the Boeing E-4B, and the service is asking US defence manufacturers for input. 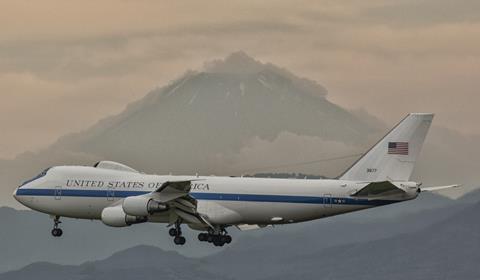 The SAOC WS is a linchpin in the US Department of Defense’s National Military Command System. It is designed to be a mobile battle command for the US president, the secretary of defense and the joint chiefs of staff.

“In case of national emergency or destruction of ground command control centers, the SAOC aircraft will provide a highly survivable command, control and communications platform to direct US forces, execute emergency war orders and coordinate actions by civil authorities,” the USAF’s notice says. “Additionally, the SAOC WS provides outside-the-continental-United States travel support for the [secretary of defense] and his staff to ensure statutory command and control connectivity.”

The USAF has four E-4Bs in its fleet. The service is looking for its next SAOC WS to be based on a commercial derivative aircraft as well.

However, production of the Boeing 747 is facing uncertainty after the commercial aircraft’s fuselage supplier Triumph started to shut down its Hawthorne, California factory last month. Boeing has about three years of orders – 18 aircraft – in its backlog, as of 30 September and has not announced the end of the aircraft’s production.

“In case of national emergency or destruction of ground command control centers, the SAOC aircraft will provide a highly survivable command, control and communications platform to direct US forces, execute emergency war orders and coordinate actions by civil authorities,”

Specifications for the Pentagon’s next command and control aircraft are not given in the notice, though the USAF says it intends to release information to interested defence companies during its first industry day in February 2020 at Hanscom Air Force Base in Massachusetts. The service is asking for companies to RSVP by 20 December.

The E-4B flying command center has seating for up to 112 people across six sections: a command work area, conference room, briefing room, an operations team work area, communications area and rest area, according to the USAF.

The legacy aircraft has a 12h range, though its flight time can be extended by an undisclosed amount through aerial refuelling.

“To provide direct support to the president, the secretary of defense, and the [joint chiefs of staff], at least one E-4B [National Airborne Operations Center] is always on 24-hour alert, 7-days a week, with a global watch team at one of many selected bases throughout the world,” says the USAF’s website.

The aircraft connects to US government leaders through “an advanced satellite communications system”.

And, the E-4B is battle hardened against several high-end threats.

“The E-4B is protected against the effects of electromagnetic pulse and has an electrical system designed to support advanced electronics, and a wide variety of communications equipment,” says the USAF. “Other improvements include nuclear and thermal effects shielding, acoustic control, an improved technical control facility and an upgraded air-conditioning system for cooling electrical components.”

The E-4B is also used to support the US Federal Emergency Management Agency as a command center during relief efforts after natural disasters, such as hurricanes and earthquakes, says the USAF.